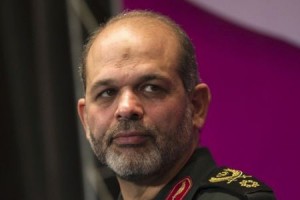 The new weapon components delivered to Iranian military units would allow them to “crush the enemy” with the mass simultaneous fire of long-range surface-to-surface missiles, Defence Minister Gen. Ahmad Vahidi was quoted as saying.

TV showed footage of him inspecting two dozen launch trucks without missiles at an outdoor site. The report did not specify the type of missile that would be fired, nor more details on the number of launchers deployed.

Some of Iran’s surface-to-surface missiles are estimated to have ranges of over 2,000 kilometers (1,200 miles), capable of hitting its arch-foe Israel and the U.S. bases in the region.

Vahidi did not specify who was the “enemy” and said Iran would never start a war.

Iran considers both the United States and Israel as enemies. Both have not ruled out a military option against Iran’s nuclear facilities, which the West suspects are aimed at weapons development. Iran denies the charge.

From time to time Iran announces military achievements that cannot be independently verified.

Facing a Western military embargo, Iran is pursuing a program for military self-sufficiency, producing weapons ranging from light submarines and jet fighters to torpedoes and missiles.