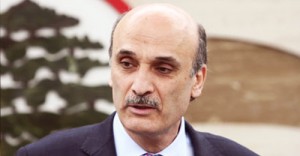 “Hezbollah’s participation in the battles alongside the Syrian regime’s forces will bring many miseries into Lebanon,” Geagea warned after meeting with Maronite Patriarch Beshara al-Rahi in Bkirki.

Hezbollah leader Sayyed Hasan Nasrallah has said before that his party’s involvement in Syria’s war aimed at defending 13 Syrian villages along the border where Lebanese Shiites live, and the Sayyeda Zeinab shrine, revered by Shiites around the world.

But on Saturday, however, the Hezbollah chief pointed out that Syria is “the backbone of the resistance, assuring that he will not let this bone break.”

“It is the most dangerous thing that could happen at this time,” Geagea warned.

Yesterday Phalange MP Sami Gemayel said that the adoption of the 1960 electoral law in the upcoming parliamentary elections would be ” a defeat for the Christians in Lebanon” and slammed Free Patriotic Movement leader MP Michel Aoun for submission of his candidacy under the 1960 law.