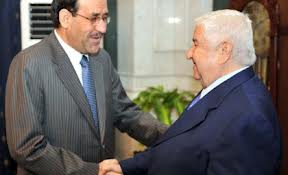 It was unclear how long the visit would last and whether Muallem would meet with any other Iraqi officials.

“The foreign minister of Syria, Walid Muallem, arrived in Baghdad at the head of a Syrian delegation,” the official said. “He will meet Prime Minister Nuri al-Maliki.”

His visit comes after Iraq on Saturday launched a massive operation to better secure its western desert amid concerns it is being used by militants heading to fight against President Bashar al-Assad’s regime in neighbouring Syria.

Among the mostly-Sunni rebels fighting Assad’s regime are groups allied to Al-Qaeda. That has fuelled fears in Baghdad of a spillover from war-torn Syria increasing tensions and violence in Iraq.

The more than two-year uprising in Syria has reportedly left more than 94,000 Syrian people dead.

Iraq has sought to publicly avoid siding either with Assad’s regime or with rebel forces, but it has been accused by Western governments of turning a blind eye in particular to Iranian overflights allegedly carrying military equipment for regime forces.