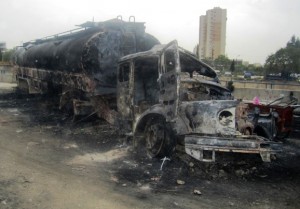 When Syrian businessman Mohammed Jaber held a dinner at a luxury hotel here for his associates recently, there was little doubt where they stood on the country’s embattled president, Bashar al-Assad.

“Bashar, we are your soldiers in the millions, no matter what,” they chanted as toasts were exchanged.

A woman visiting from Lebanon singled out Syrian army officers in the party. “You are the embodiment of honor and dignity, and the dirt on your boots is a crown on our heads,” she said.

Mr. Assad’s regime has defied myriad predictions of its imminent demise, and lately has taken the offensive against the rebels in the more than two-year-old uprising. In coordination with Lebanon’s Iranian-backed Hezbollah group, Mr. Assad’s forces this week launched a sweeping military campaign to retake Qusayr, a western town crucial to securing roads to Lebanon and Syria’s regime-controlled Mediterranean coast.

In addition, regime forces pressed ahead on multiple fronts against besieged opposition enclaves in Damascus suburbs where the government has succeeded since April in cutting off rebel supply lines.

A critical reason for the regime’s resilience—in addition to military help from allies like Russia, Iran and Hezbollah—is that Mr. Assad can count on a circle of Syrian businessmen like Mr. Jaber deeply committed to the Assad government. Together, they help it weather the devastating impact of war and international economic sanctions.

Mr. Jaber’s focus is energy. Syrian oil and gas production has fallen to a fraction of its level two years ago. Though Iran and Iraq provide supplies, chaotic conditions and rebel sabotage have crippled the ability to move oil products around Syria by pipeline or rail. Mr. Jaber has stepped in to organize tanker-truck convoys and provide them with armed escorts.

Crude oil shipped in from Iran to Syria’s west coast is refined at plants not far from Qusayr, where fighters from the government and Hezbollah are battling rebels.

For their support of the regime, Mr. Jaber and his brother Ayman have been sanctioned by the European Union, the Arab League and the U.S. Treasury Department, and are subject to a travel ban. The Treasury has accused them of helping Mr. Assad’s brother Maher, who is a senior military commander, and other security forces to organize, finance and arm the Shabiha—groups of militants the opposition says are participants in the regime’s brutality against foes.

In an interview, Mr. Jaber denied being an associate of Maher al-Assad—but he spoke warmly of the Shabiha militants.

Mr. Jaber proudly took responsibility for organizing protests that disrupted an opposition conference in Turkey in June 2011 and for mobilizing an attack that vandalized the American embassy in Damascus the next month.

“If Shabiha refers to those defending their homeland, then it’s a medal of honor,” he said.

In normal times, Mr. Jaber’s task of fuel transport would largely be handled by the Ministry of Petroleum and Mineral Resources, housed in a complex in a Damascus suburb called Dummar. At the complex, large maps of oil fields, pipelines and infrastructure greet visitors in the lobby.

Most of the country’s largest oil fields, in the northeastern and eastern provinces of Deir al-Zour, Hasakah and Raqqa, are “temporarily” under the control of rebels and antigovernment militias, according to the official. He said the rebel groups use rudimentary methods to steal and refine crude oil and have set nine wells on fire.

More than 75 oil-industry employees have been killed and 100 kidnapped in the area since the start of the war, the official said.

A pipeline for moving light crude oil from the oil fields to terminals and refineries in western Syria is shut down, and one for heavy crude is attacked regularly, the official said. Pipelines for shipping refined products to the capital in central Syria and the north are out of service.

Mr. Jaber specializes in overcoming such logistical challenges. Referring to the likes of Mr. Jaber, the ministry official said, “Even if you want the Statue of Liberty, there are those who can bring it for you at the right price.”

Although the Assad regime has at times received oil from Russia and Venezuela, the bulk of it now comes from Iran and Iraq. Mr. Jaber estimated that nearly two million barrels of crude oil arrive by ship from Iran each week at the Syrian port of Latakia on the Mediterranean, to be refined in Homs and Baniyas, the sites near the embattled city of Qusayr.

Although the Assad regime has at times received oil from Russia and Venezuela, the bulk of it now comes from Iran and Iraq. Mr. Jaber estimated that nearly two million barrels of crude oil arrive by ship from Iran each week at the Syrian port of Latakia on the Mediterranean, to be refined in Homs and Baniyas, the sites near the embattled city of Qusayr.

For nearly a year, Iraq has been providing Syria with fuel oil as part of a one-year, nearly 800,000-ton contract, according to Mr. Jaber and two Iraqi officials.

Mr. Jaber said he has taken the lead on the contract. Almost every month, he flies to Baghdad with suitcases filled with hundreds of thousands of dollars of cash on behalf of the government, he said—showing a slip for a recent million-dollar deposit in an Iraqi bank. Wire transfers aren’t an option because of sanctions.

With Syrian government permission, Mr. Jaber said, he has trained and armed hundreds of gunmen to escort tanker trucks hauling oil products across Iraq to Syria, and then within Syria.

The nearly 500-mile journey from Iraq’s oil installations is mostly through desert and is filled with perils. Two of the three Iraq-Syria border crossings lie in rebel-controlled areas and are closed. Groups linked to al Qaeda are active on both sides of the border.

Mr. Jaber said he and all those working with him, including truck drivers, receive daily threats from rebels, often in texts to their cellphones.

“We will turn every truck transporting fuel for this tyrant into an inferno for its owner,” pledged one pro-Syrian rebel Iraqi group in leaflets distributed recently at the border.

Mr. Jaber’s home in the Damascus suburb of Qudsaya was attacked in October. The entire apartment building was looted and then set on fire, according to neighborhood residents. Neither Mr. Jaber, who is 57 years old, nor members of his family were there. He said he has moved his wife and children to Moscow while he works out of a suite in a Damascus hotel.

Mr. Jaber was born in Latakia, a stronghold of the Shiite-linked Alawite sect that includes Mr. Assad and is a minority in Sunni-majority Syria.

Mr. Jaber was born in Latakia, a stronghold of the Shiite-linked Alawite sect that includes Mr. Assad and is a minority in Sunni-majority Syria. Many of the businessmen supporting the regime are Alawites, including Mr. Jaber. However, some Sunni businessmen have also stuck with the government, particularly in the Syrian economic capital of Aleppo, where they witnessed the looting of their factories by rebels.

Mr. Jaber and his brother Ayman have long been involved in trade and in Syria’s steel industry. He said he also has been importing fuel from Iraq for Syria’s government since 2005, and he helped Iraq obtain diesel fuel during its war. His experience and loyalty to Mr. Assad made him a natural for his current fuel-transport role, Mr. Jaber said.

“We are with the regime to the bone. If President Bashar asks for our blood, we would give it to him,” he said.

“We are with the regime to the bone. If President Bashar asks for our blood, we would give it to him,” he said.

Lately, Mr. Jaber has sought to diversify Syria’s energy sources by organizing fuel convoys from Lebanon, whose border is only a few miles west of Damascus. Lebanese militants allied with Syria’s rebels regularly attack the convoys.

Mr. Jaber shrugs off the attackers. “They are mere riffraff,” he said, boasting he has been able to operate under worse conditions.

Last July, on a day when the assassination of an Assad brother-in-law provoked clashes in the capital, Mr. Jaber said he succeeded in delivering 1,200 tons of fuel from the Iraqi border to the capital city’s main power plant. This spring, he personally helped deliver an urgent fuel shipment to the Syrian province of Suwaida, south of Damascus, which could be reached only by traversing a zone where rebels and government forces have been fighting for months.

Mr. Jaber revels in recounting an incident in July 2011 when U.S. Ambassador Robert S. Ford left the capital to visit protesters in the central city of Hama. Mr. Jaber said he told Emad Ghreiwati, an industrialist whose brother Issam heads the Syrian American Business Council, to let the ambassador know he had 24 hours to “apologize to the Syrian people because he breached diplomatic norms” or see the U.S. embassy besieged by loyalists.

Mr. Jaber said he and dozens of members of pro-regime paramilitary groups later broke into the US embassy, smashed windows, attacked offices and burned the U.S. flag, before Syrian security forces intervened.

Mr. Ford left the country four months later because of what a State Department official called “threats against his personal safety in Syria.” In February 2012 the U.S. suspended its representation in Damascus and later expelled Syria’s ambassador to Washington.

Mr. Ford didn’t respond to emails requesting comment. Issam Ghreiwati declined to be interviewed, and efforts to reach his brother were unsuccessful.

Mr. Jaber said Syria’s president faces the same “conspiracy” that his late father Hafez al-Assad, founder of the regime, tackled in the 1980s when he battled Islamist insurgents and militants linked to the Muslim Brotherhood. Tears streamed down Mr. Jaber’s cheeks as he played an audio on his cellphone of a speech by the late president railing against the Sunni Islamist scourge.

As for the current struggle, Mr. Jaber said the real war hasn’t started yet, adding that he is ready to mobilize 100,000 men in his native Latakia if the regime asks him to. “If the entire world stands against us, we won’t abandon Syria and its leader Bashar al-Assad,” he said.

Photo: A Syrian diesel fuel tank truck was set on fire in Lebanon by supporters of the Syrian revolution to prevent the use of the fuel by the Syrian army in its crackdown against the uprising.