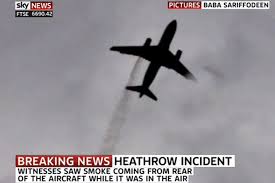 Passengers on board a British Airways plane forced to make an emergency landing at Heathrow praised the pilot’s swift and “calm” actions and said he had averted potential disaster.

The airbus A319, bound for Oslo, left London shortly before 8am and was on its ascent when loud “popping” sounds were heard and the engines caught fire.

Having taken off to the west, the pilot had to divert back to Heathrow, taking a flight path across central London.

Eye witnesses on the ground described seeing the plane fly overhead with smoke billowing out of one of its engines.

It was the most serious incident at Heathrow since January 2008 when another BA aircraft, a Boeing 777 crash-landed at the airport after both its engines failed as it approached the airport at the end of a flight from Beijing.

David Gallagher, CEO of PR company Ketchum, who was among the 75 passengers on board the Oslo flight, said they realised something was awry within 10 minutes of take-off.

“We heard this loud popping sound to one side of the plane,” he told The Daily Telegraph. “I was sitting on the left and could see that the engine had blown its cover.

“People sitting on the other side realised that the same thing had happened there too. It was certainly rather alarming but the cabin crew remained completely calm and the captain spoke to us over the tannoy.

“He said he was aware there was an issue and would be running some tests but that things were fine.

“Then we realised that the right engine was on fire, there was lots of smoke. It triggered a lot of anxiety, there were a few people who were very upset.

“The plane was about three quarters full so the people sitting near the engine moved away.”

Mr Gallagher, who had been en route to Norway for a business meeting, said the crew were “fantastic” and completely unflappable, despite the growing panic.

“The captain came back on and said we would be returning to London. He said it might be a tough landing but it wasn’t at all. It was completely smooth.

“The emergency evacuation was exactly like they say it will be in the safety demo. We were brought off the plane very quickly and came down the slides.

“You never think you’ll have to do that, it was pretty scary. I could see that the engine was still on fire. We were only in the air for 20 minutes but it felt like an hour.”

Meanwhile terrified onlookers on the ground spoke of their terror at seeing an aircraft above them with its engine on fire.

“The actual engine itself was on fire,” Clive Cook, who lives under the flight path, told Sky News.

“This plane was coming over and suddenly the tone of the engine changed dramatically, and I could almost say it sounded as if it was like a blowout, or an explosion.

“I’m absolutely certain that as it came through the clouds, and I looked up.

“The right engine was on fire, it wasn’t smoking, it was actually on fire.”

As an inquiry into the incident launched by the Air Accidents Investigation Branch is expected to focus on why the casing on the left engine shorn off as well as why the right engine burst into flames.

Some experts suggested one of the engines may have suffered a bird strike.

Others believe the inquiry will focus on the maintenance of the aircraft which is understood to have undergone a weekly inspection within hours of the flight.