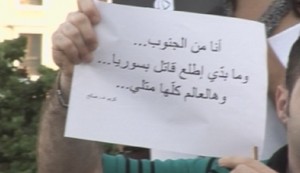 A number of Lebanese and Syrian nationals held a demonstration on Tuesday in the Martyrs’ Square in downtown Beirut to protest against Hezbollah’s intervention in the al-Qusair battles in Syria, LBCI reported on Tuesday.

In a phone interview from Jordan, where he is holding talks ahead of Thursday’s “Friends of Syria” meeting, the head of the opposition Supreme Military Council lashed out at Hezbollah as religious extremists, while also claiming President Bashar Assad’s government had lied about gains in the strategic city of Qusair over the weekend.

He branded Hezbollah (the party of God) the devil’s party

“The devil’s party is attacking Syrian territory, slaughtering the Syrian people to help the criminal Bashar’s forces,” he said.

A huge convoy of Hezbollah fighters headed to Syria during the week end to help the forces loyal to president Bashar al Assad in retaking the town of Qusair from the Syrian rebels.

The Syrian Observatory for Human Rights, an opposition watchdog group, reported that at least 28 Hezbollah guerrillas had died in the fighting. If confirmed, that would be by far the largest toll for Hezbollah in a single Syrian battle.

Photo: A Protester against Hezbollah’s involvement in Syrian civil war holds a poster that reads: “I am from the south …I dont want to go to Syria to fight …..all the people are like me.”