3 killed in fighting over Syria in north lebanon 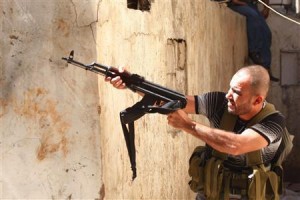 Three people have been killed and about 40 wounded in two days of fighting in Lebanon’s northern city of Tripoli, security sources said on Monday, as sectarian violence spilled over from the civil war in Syria.

Rocket-propelled grenades and heavy gunfire shook the city overnight but the exchanges had tapered off into sporadic sniper fire by daytime. Four of the wounded were Lebanese soldiers trying to keep the warring sides apart, a security source said.

Syrian activists say the latest fighting in Tripoli, where an Alawite minority lives on a hill overlooking the mainly Sunni Muslim port city, was ignited by tensions over an assault by Syrian troops backed by Lebanon’s Shi’ite Hezbollah militia on the rebel-held Syrian border town of Qusair.

Sunnis in Lebanon mostly sympathize with a Sunni-led revolt against Syrian President Bashar al-Assad, whose minority Alawite sect is an offshoot of Shi’ite Islam.

Lebanese militants are believed to be crossing the border to join fighting in Syria on both sides of a conflict which has sometimes spilled over into Lebanon, especially in Tripoli.

The Syrian army offensive in Qusair is an attempt to recapture a town that straddles routes from Lebanon to the central crossroads city of Homs, which links Damascus to the north, as well as to Alawite strongholds on the coast.

Each side accuses the other of using Tripoli as a base for sending fighters and weapons in and out of Syria.