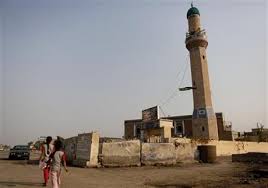 A sharp rise in attacks on Sunni holy sites in Iraq is feeding fears that the country could spiral into a new round of sectarian violence similar to the bloodletting that brought Iraq to its knees in 2006 and 2007.

Majority Shiites control the levers of power in post-Saddam Hussein Iraq. Wishing to rebuild the nation rather than revert to open warfare, they have largely restrained their militias over the past five years or so as Sunni extremist groups such as al-Qaida have targeted them with occasional large-scale attacks.

That may now have changed.

If it turns out that Iranian-backed Shiite militias are responsible for the recent attacks on Sunnis, it could signal a turn toward cyclical retaliatory violence.

At least 29 Sunni mosques were attacked between mid-April and early May, according to Mahmoud al-Sumaidaie, the deputy head of Iraq’s Sunni Endowment, which oversees the sect’s holy sites. At least 65 Sunni worshippers were killed, according to a tally compiled by The Associated Press from police reports.

By contrast, two Shiite mosques were hit in bombings that killed one person over the same period, police and hospital officials said. Dozens of Shiites were killed in attacks by Sunni extremists at places other than holy sites during this time.

In all of 2012, there were only 10 recorded attacks on Sunni holy sites, al-Sumaidaie said.

In a sign of increasing fears by the Shiite-led government that the country might be descending into sectarian strife, Prime Minister Nouri al-Maliki warned last week that terrorists and extremist groups are taking advantage of the turmoil by targeting “certain areas and mosques.”