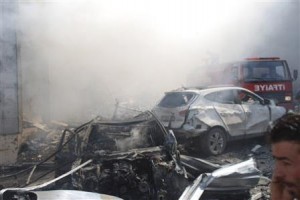 Twin car bombs killed 43 people and wounded many more in a Turkish town near the Syrian border on Saturday and the government said it suspected Syrian involvement.

The bombing increased fears that Syria’s civil war was dragging in neighboring states despite renewed diplomatic moves towards ending two years of fighting in which more than 70,000 people have been killed.

The bombs ripped into crowded streets near Reyhanli’s shopping district in the early afternoon, scattering concrete blocks and smashing cars in the town in Turkey’s southern Hatay province, home to thousands of Syrian refugees.

Restaurants and cafes were destroyed and body parts were strewn across the streets. The damage went at least three blocks deep from the site of the blasts.

“We know that the people taking refuge in Hatay have become targets for the Syrian regime,” Arinc said in comments broadcast on Turkish television. “We think of them as the usual suspects when it comes to planning such a horrific attack.”

Another deputy prime minister, Besir Atalay, was quoted by NTV as saying initial findings suggested the attackers came from inside Turkey, but had links to Syria’s intelligence agency.

There was no immediate claim of responsibility. Nor was there any comment from Damascus.

NATO-member Turkey has fired back at Syrian government forces when mortars have landed on its soil, but despite its strong words has appeared reluctant to bring its considerable military might to bear in the conflict.

Foreign Minister Ahmet Davutoglu said Turkey reserves the right to take “every kind of measure”, but he said he saw no need for an emergency meeting of NATO which would be the first step towards involving the alliance in any possible response.

U.N. Secretary-General Ban Ki-moon’s office said he hoped the perpetrators would be swiftly brought to justice.

NATO member Turkey supports the uprising against Assad and violence has crossed the border before, but not on the same scale. The bombings were the bloodiest incident on Turkish soil since Syria’s conflict began more than two years ago. 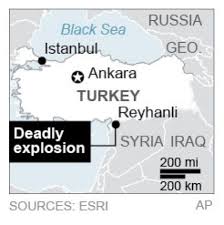 Turkey is far from alone in fearing the impact of Syria’s war, which is already helping inflame the Middle East’s tangle of sectarian, religious and nationalist struggles.

The violence has inflamed a confrontation between Sunni and Shi’ite Muslims in the Middle East, with Shi’ite Iran supporting Assad, and Sunni powers like Saudi Arabia backing the rebels.

Israel launched air strikes a week ago, aimed at stopping Iranian missiles near Damascus from reaching Tehran’s Lebanese allies Hezbollah for possible use against the Jewish state.

Days later, Hezbollah leader Hassan Nasrallah said his forces would support any Syrian effort to recapture the Israeli-occupied Golan Heights, raising the prospect of renewed conflict after decades of calm on that border.

Davutoglu said it was no coincidence the Reyhanli bombings came as diplomatic moves to end the Syrian conflict intensify.

“There may be those who want to sabotage Turkey’s peace, but we will not allow that,” Davutoglu told reporters during a trip to Berlin. “No one should attempt to test Turkey’s power.”

Prospects appeared to improve this week for diplomacy to try to end the civil war, now in its third year, after Moscow and Washington announced a joint effort to bring government and rebels to an international conference.

But a Russian official said on Saturday that there was already disagreement over who would take part and he doubted whether a meeting could happen this month.

As well as disputes over who would represent the rebels and government at any talks, there have also been questions over possible participation by Assad’s Shi’ite ally Iran. The rebels are backed by the largely Sunni Gulf states.

Diplomats in New York said the Syria meeting would likely slip into June and it was unclear who would participate.

In Reyhanli, smoke poured from charred ruins after the blasts outside administrative buildings.

“My children were so scared because it reminded them of the bombings when we were in Aleppo. God help us,” said one refugee from the northern Syrian city, a mother of three who gave her name as Kolsum.

Atalay said 43 people had been killed, while Prime Minister Tayyip Erdogan warned the toll could rise. Officials said more than 100 people were injured, many of them critically.

Turkey is sheltering more than 300,000 Syrians, most of them in camps along the 900-km (560-mile) frontier, and is struggling to keep up with the influx.

The main opposition Syrian National Coalition said the attacks were a failed attempt to “destroy the brotherhood” between Syrians and Turks and were intended as a punishment for Turkey’s support of the uprising.

Erdogan said this week Turkey would support a U.S.-enforced no-fly zone in Syria and warned that Damascus crossed President Barack Obama’s “red line” on chemical weapons use long ago.

A no-fly zone to prohibit Syrian military aircraft from hitting rebel targets has been mentioned by American lawmakers as one option the United States could use to pressure Assad.

Erdogan is due to meet Obama in Washington on May 16.

Photo: Smoke rises from site of an explosion in the town of Reyhanli near the Turkish-Syrian border May 11, 2013. REUTERS/Ihlas News Agency via Reuters