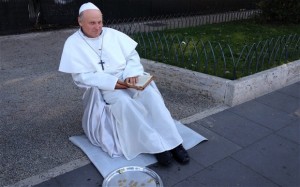 Wearing a crucifix, a skull cap and a white cassock, he is the spitting image of the late John Paul II.

But a performer who has been entertaining tourists in Rome in recent weeks with his striking resemblance to the former Polish Pope has been arrested and fined in an unusual case of lese majeste.

The performer, who is from Slovakia, recently posed for photographs for The Daily Telegraph in return for a few coins tossed into a silver platter.

“John Paul was a great Pope. Lots of people ask to have their photograph taken with me,” he said.

Sitting on a chair and smiling beatifically while reading a Bible, he had staked out a spot on the Via dei Fori Imperiali, the broad avenue that leads up to the Colosseum.

Thronged with tourists at all times of the day, it appeared to be a lucrative patch, with visitors stopping and staring in surprise at his similarity to the popular Polish pontiff.

But his days as a papal impersonator came to an end on Friday when police detained him and told him he will be hit with a fine of between 154 and 929 euros, depending on a court’s decision.
“The problem was that he looked a lot like Karol Wojtyla. He was detained for usurpation of title which is a misdemeanour,” a police spokeswoman told AFP.

“The cassock he was wearing has been confiscated,” she said, adding that the action had been taken after an anonymous complaint.

The Slovak was one of several buskers and street artists who try their luck along the street, from bands of Peruvian pipers to fake centurions and legionaries, and performers who stand stock still dressed as the Statue of Liberty.

“If he had been dressed like Tutankhamen nothing would have happened,” another police officer said.

Local media had joked that the fake Pope had brought the number of pontiffs in Rome to three, along with Pope Francis and his predecessor Pope Emeritus Benedict XVI, who is living out his retirement in a former convent in the Vatican.