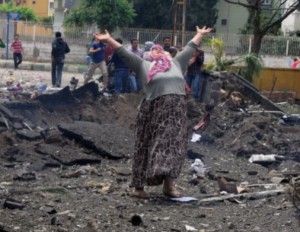 Turkish officials said an attack in a town near Syria that killed at least 43 people yesterday was carried out by a group linked to Syria’s intelligence service.

The perpetrators have been identified as being tied to Syria’s military intelligence agency, the al-Mukhabarat, Deputy Prime Minister Besir Atalay said yesterday, according to the state-run Anatolia news agency.

“The group and its members who organized the attack are linked to the al-Mukhabarat, which supports the regime in Syria,” Anatolia quoted Atalay as saying. “The group is certain, and most of the people responsible are also certain,” he said, without providing further details.

The twin car-bomb explosions in Reyhanli left about 100 people injured, 29 of them seriously, Interior Minister Muammer Guler said in televised remarks. News channels showed the charred wreckage of overturned cars and buildings reduced to smoking rubble after the attack.

The bombings mark the deadliest single terrorist incident in recent Turkish history. In 2003, al-Qaeda bombings in Istanbul first hit two synagogues, killing at least 27 people. Five days later the group set off bombs at an HSBC building and the British consulate, killing at least 30. In 1993, the Kurdistan Workers’ Party, or PKK, killed 33 Turkish soldiers in an ambush, the group’s deadliest attack on record.

“The United States condemns today’s car bombings and we stand with our ally, Turkey,” Secretary of State John Kerry said yesterday in a statement, calling the bombings “awful.” He said the attack struck a personal note because of his close work with Turkey in his first three months as the U.S.’s chief diplomat.

Turkey has sided with rebels fighting to oust Syrian President Bashar al-Assad, who has accused the Turkish government of providing them with military support. Turkey, which has opened its doors to more than 300,000 Syrians who fled the conflict, denies arming the rebels.

About 25,000 refugees live in camps in the area of the blasts, which may have been carried out by people opposed to Turkey’s safe haven or seeking to use their presence as a pretext for provocation, Prime Minister Recep Tayyip Erdogan said.

Assad is the “usual suspect” behind the bombings, Deputy Prime Minister Bulent Arinc said in remarks on NTV television yesterday. “A massacre was carried out,” he said. “If proven it was Assad, we will do whatever is required.”

The violence from the civil war in Syria has previously spilled over into its northern neighbor, where a Feb. 11 car-bomb attack at the Turkish border crossing of Cilvegozu killed 14 people, mostly Syrians, and injured more than two dozen.

In October, Turkey’s parliament approved a motion allowing the government to order military action against Syria, after a shell fired across the border killed five Turks. Erdogan’s motion was backed by a nationalist opposition party, while the main opposition group came out against it.

Erdogan is scheduled to meet with U.S. President Barack Obama in Washington on May 16. In an interview with NBC on May 9, Erdogan called on the U.S. to “assume more responsibilities and take further steps” to end the fighting in Syria.

Foreign Minister Ahmet Davutoglu told reporters in Berlin yesterday that it was “not a coincidence” that the explosions occurred at a critical time in efforts to end the Syrian conflict.

In a Damascus interview taped on April 2, Assad accused Erdogan of lying while harboring rebels fighting his government, and of cooperating with Israel against Syria.

“Turkey’s hands have been stained with blood in Syria,” Assad said.

Photo : A woman at the scene of the car bombings in Reyhanli, close to the border with Syria. Picture: AP