9 Detained in Turkey Car Bombings. All Linked to Syria’s Assad 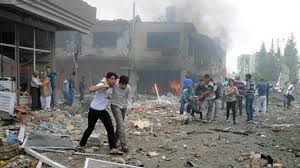 Turkish authorities said Sunday that nine people had been detained in twin car bombings a day earlier in southern Turkey that killed 46 people and injured at least 155.

Speaking at a news conference, senior government officials said that the nine people detained had been linked to the Syrian government of President Bashar al-Assad through evidence gathered after the bombings in Reyhanli near Turkey’s border with Syria.

“The incident was carried out by those who have been closely linked with pro-regime groups in Syria,” Turkey’s interior minister, Muammer Guler, said.

“There is no merit in spelling out the names, we know them all,” Mr. Guler said.

The Syrian government on Sunday denied an involvement. “Syria didn’t and will never undertake such acts because our values don’t allow us to do this,” Omran al-Zoubi, the information minister, was quoted as saying in Damascus.

If connected to the Syrian war, as Turkey claimed, the attack would be the deadliest spillover since the beginning of the uprising against Mr. Assad in March 2011. In October, shells fired from Syria killed five people in Turkey, and the Turkish government blamed Mr. Assad’s forces. At least 14 people died in a separate episode when a car bomb exploded at a border crossing.

Officials said that 35 of the 46 dead were Turkish citizens and 3 were Syrian, while 8 were still unidentified. Two of the 55 still hospitalized in critical condition after more than one hundred were treated at hospitals and medical centers in several cities including Istanbul, Ankara and Adana, the health minister, Mehmet Muezzinoglu, said.

The powerful car bombs, which came 15 minutes and barely a mile apart, transformed downtown office blocks in Reyhanli into smoldering husks in one of the deadliest attacks on Turkish soil in at least a decade. Officials said investigations continued to determine the type of explosives used.

Hours after the explosion, officials with Turkey’s government, which has backed the rebels fighting President Assad of Syria, said the suspects in the bombing belonged to an organization linked to Mr. Assad’s intelligence services, though they did not offer an explanation of how they reached that conclusion.

Turkey’s claims of Syrian involvement raised the possibility of an escalating conflict with that country and the broadening of the war. A senior Turkish Foreign Ministry official said Saturday that the government had not reached the point where it was considering a military retaliation, but added, “No crime will be left without a response.”

In blaming Mr. Assad’s government, Turkish officials seemed anxious to stave off any possible backlash against thousands of Syrian refugees in Reyhanli or its allies in the Syrian opposition for the bombing. The town is in a region of southern Turkey where some Turks have bristled at their government’s willingness to make Turkey a party to the war, putting it at risk.

Turkish officials have been especially concerned with the possibility that sectarian tensions that have come to define the civil war in Syria will spill over the border, and trouble ethnically mixed regions of southern Turkey. There are also fears that the sheer numbers of Syrians in the country will stoke resentment: around Reyhanli, some 25,000 Syrian refugees live among 90,000 Turkish citizens, according to local officials.

After the bombings on Saturday, angry residents smashed the windows of cars from Syria, and a Turkish newspaper reported that protests against Prime Minister Recep Tayyip Erdogan later erupted in Reyhanli’s streets.

The attack occurred as Mr. Erdogan was scheduled to visit Washington this week to meet President Obama and discuss the urgency for a resolution of the conflict in Syria. Secretary of State John Kerry released a statement condemning the bombings and praising Turkey’s role as a “vital interlocutor.”