Syria’s government has pressed the button to implement “Plan B” following the latest killings in Banias, Turkish Foreign Minister Ahmet Davutoğlu has said, claiming that Syrian President Bashar al-Assad is launching a fifth step to create a safety corridor for Nusayris between the central city of Homs and Lebanon.

During a telephone conversation with U.S. counterpart John Kerry on May 6, Davutoğlu conveyed his concerns about the latest alleged massacre by Damascus. Activists reported the bodies of at least 62 people had been found over the weekend in a Sunni district of the port city of Banias after an assault by the government.

The foreign minister told daily Hürriyet that the regime and Shabiha forces were trying to “cleanse” the corridor between Homs and Lebanon and likened this strategy to the ethnic cleansing of the 1990s in Srebrenica and eastern Bosnia that was conducted with the goal of creating a Serb-dominated area free of Bosniaks. 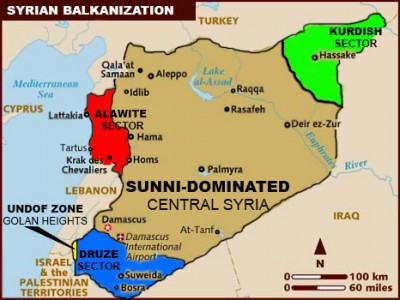 The foreign minister also said Turkey would be a protector of Nusayris, also known as Alawites, if a similar atrocity were perpetrated against them.“As I told Mr. Kerry, the slaughter in Banias is a new stage. Until now, the regime has followed four stages. The first one was to direct snipers to peaceful protests. The second one was to ‘punish’ the cities with artillery and tanks. Then cities began to resist, so he passed to the third stage: air bombardment. In the fourth stage, he began to use Scud missiles,” Davutoğlu said. “Al-Assad has now shifted his strategy to ethnically cleanse a certain area of the country since he can not control everything. This is the strategy of what they call ‘Plan B’ linked to sectarian clashes, aiming to create a corridor for a sect.”