Petra added that the Parliament tasked the Arab and International Affairs Committee to issue a “strongly worded statement regarding Israeli measures against Al-Aqsa mosque as well as Muslim and Christian holy places in Jerusalem.”

According to the report, the Jordanian cabinet instructed Jordan’s ambassador in Israel to file an official complaint to the Israeli government, which could eventually be followed by a complaint to the UN Security Council if the situation escalates. 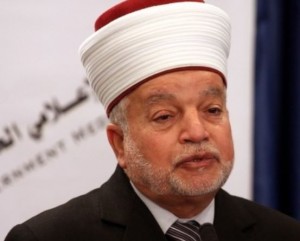 Israeli police arrested on Wednesday the Palestinians’ top Muslim religious leader from his Jerusalem home, a day after Palestinians and Israelis scuffled outside the city’s flashpoint al-Aqsa mosque.

The detention was widely condemned by Palestinian leaders as an infringement of religious freedom in the holy city.

Sheikh Mohammad Hussein, the Grand Mufti of Jerusalem, serves under the Palestinian Authority which exercises limited rule in the Israeli-occupied West Bank as well as neighboring Jordan, long a custodian over Jerusalem’s Muslim holy places.

The incident began, Rosenfeld said, when Israeli police detained a Palestinian who wanted to enter the plaza but refused to present his identification card.

It developed into a scuffle in which Muslim worshippers threw chairs at Jewish visitors at the site, he added.

“His arrest was a flagrant challenge to the freedom of worship,” Abbas said in a statement on the official Palestinian WAFA news agency.

Israel annexed East Jerusalem after the 1967 war and considers all of the city its capital in a move that has never been recognized internationally. The Palestinians say East Jerusalem must be the capital of their future state.

Al-Aqsa mosque is one of the most sensitive sites in the city. Many Muslims see it as the third holiest place after Mecca and Medina, believing the Prophet Mohammad ascended into heaven from the spot during a night journey to Jerusalem.