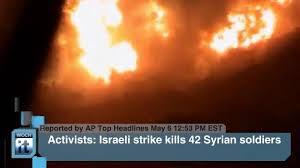 Israel’s weekend airstrike on a military complex near the Syrian capital of Damascus killed at least 42 Syrian soldiers, a group of anti-regime activists said Monday, citing information from military hospitals.

The Syrian government has not released a death toll, but Syrian state media have reported casualties in Sunday’s pre-dawn airstrike, Israel’s third into Syria this year.

The Britain-based Syrian Observatory for Human Rights said about 150 soldiers are normally stationed in the area that was targeted, but that it was not clear how many were there at the time of the strike.

Rami Abdel-Rahman, the head of the group, said his sources at Syrian military hospitals gave him information on 42 Syrian soldiers killed in the Israeli attack.

Israel’s government has not formally confirmed involvement in strikes on Syria.

However, Israeli officials said the attacks were meant to prevent advanced Iranian weapons from reaching Lebanon’s Hezbollahmilitia, an ally of Syria and foe of Israel.

The officials spoke on condition of anonymity because they were not authorized to discuss covert military operations.

Israel on Monday signaled a return to “business as usual,” with Prime Minister Benjamin Netanyahu arriving in China for a scheduled visit.

Syria and its patron Iran have hinted at possible retribution for the strikes, though the rhetoric in official statements has been relatively mild.

Iranian Foreign Minister Ali Akbar Salehi warned Monday that Israel was “playing with fire,” but gave no other suggestions of possible consequences, according to the official Islamic Republic News Agency.

Syria’s government called the attacks a “flagrant violation of international law” that has made the Middle East “more dangerous.”

Israeli officials have indicated they will keep trying to block what they see as an effort by Iran to send sophisticated weapons to Lebanon’s Hezbollah militia ahead of a possible collapse of Syrian President Bashar Assad’s regime.

Israel has repeatedly threatened to intervene in the Syrian civil war to stop the transfer of what it calls “game-changing” weapons to Hezbollah, a Syrian-backed group that battled Israel to a stalemate during a month-long war in 2006.

Since carrying out a lone airstrike in January that reportedly destroyed a shipment of anti-aircraft missiles headed to Hezbollah, Israel had largely stayed on the sidelines. That changed this weekend with the pair of airstrikes, including an attack near a military complex close to Damascus early Sunday that set off powerful explosions.

The official spoke on condition of anonymity because he was discussing a covert military operation.

They include Syrian chemical weapons, the Iranian Fateh-110s, long-range Scud missiles, Yakhont missiles capable of attacking naval ships from the coast and Russian SA-17 anti-aircraft missiles. Israel’s airstrike in January destroyed a shipment of SA-17s meant for Hezbollah, according to U.S. officials.

Israeli officials said the Fateh-110s reached Syria last week. Friday’s airstrike struck a Damascus airport where the missiles were being stored, while the second series of airstrikes early Sunday targeted the remnants of the shipment, which had been moved to three nearby locations, the officials said.

None of the Iranian missiles are believed to have reached Lebanon, said the officials, who spoke on condition of anonymity because they were discussing a classified intelligence assessment.

In launching the strikes, Israel took a gamble that Assad has little desire to open a new front with Israel when he is preoccupied with the survival of his regime.

“Alongside readiness and alertness, it’s always good to prepare and train — but there are no winds of war,” the head of Israel’s northern command, Maj. Gen. Yair Golan, told Israeli media.

On Monday afternoon, the Israeli military reported that two shells fired from Syria had landed in the Israeli-annexed Golan Heights. The military said the shelling appeared to be accidental spillover from the Syrian civil war and was not connected to tensions over the reported airstrikes.

Stray shelling and gunfire from the Syrian civil war has periodically landed in the Golan in recent months. The Israeli military believes most of these incidents have not specifically targeted Israel.

Tzahi Hanegbi, an Israeli lawmaker who is close to Netanyahu, said Monday that Israel’s aim is to “keep advanced weapons from Hezbollah as soon as intentions are exposed and refrain from tension with Syria.”

“So if there is activity, then it is only against Hezbollah and not against the Syrian regime,” Hanegbi told Israel Radio. “In that context you must see the fact that Israel doesn’t officially admit to its operations, and that the prime minister left yesterday for China and (there is) the feeling of business as usual.”

Hezbollah fired some 4,000 rockets into Israel during the 2006 war, and Israel believes the group now has tens of thousands of rockets and missiles.

The attacks pose a dilemma for the embattled Assad regime.

If it fails to respond, it looks weak and opens the door to more airstrikes. But any military retaliation against Israel would risk dragging the Jewish state and its powerful army into a broader conflict. With few exceptions, Israel and Syria have not engaged in direct fighting in roughly 40 years.

The airstrikes come as Washington considers how to respond to indications the Syrian regime may have used chemical weapons in its civil war. President Barack Obama has described the use of such weapons as a “red line,” and the administration is weighing its options.

The White House declined for a second day to comment directly on Israel’s air strikes in Syria, but said Obama believes Israel, as a sovereign nation, has the right to defend itself.

The uprising against Assad erupted in March 2011, quickly turning into an armed insurgency and then a civil war. More than 70,000 people have been killed and millions displaced, while Assad and those trying to topple him remain deadlocked on the battlefield.