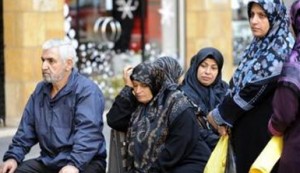 Relatives of Lebanese hostages held in Syria’s Aazaz staged on Saturday a sit-in outside the Turkish airlines offices and the Turkish cultural center in Downtown Beirut and Hamra, LBC reported on Saturday.

The protesters prevented the airlines staff from heading to their offices located near the Bourj al-Murr area.

Families of the abductees are set to stage a sit-in on Sunday in South Lebanon outside the Turkish contingent serving in the United Nations Interim Forces in Lebanon (UNIFIL), the report added

Eleven Lebanese Shiite pilgrims were kidnapped in Syria last May on their way back from Iran by insurgents hoping to use them for a prisoner swap on the 20th of May. Only two have so far been released.

Their families accuse Ankara of sponsoring the kidnapping and the Lebanese government of inaptness in this regard.

They have been calling for the boycott of all Turkish products in Lebanon since “Lebanon imports annually a billion dollars worth of products from Ankara .” The families have also prevented Turkish trucks from offloading shipments at the Karantina dock, according to the report.
Prisoner swap

Caretaker Interior Minister Marwan Charbel was quoted by Kuwaiti newspaper al-Seyasseh as saying on Saturday that positive steps to resolve the kidnapping are taking place.

He said that Lebanese authorities are awaiting from the kidnappers a list of names of Syrian female prisoners held in Syrian jails they want released in exchange for the pilgrims.

General Security chief Abbas Ibrahim is expected to head to Damascus in order to receive the list, revealed the minister without disclosing the date of the trip.

Charbel said that Qatar and Turkey are exerting serious efforts to resolve the case of the Aazaz pilgrims, but noted that previous experiences with the abductors “are not promising.”

Al-Mayadeen TV reported earlier this week that the abductors have demanded “the release of 282 women detainees from Syrian prisons in return for the release of the Lebanese.”

The kidnappers reportedly submitted a list of the names of women detainees to “a high-ranking diplomatic figure” and a Turkish official handed the list to Ibrahim.