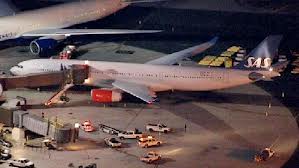 The left wing of the Scandinavian Airlines plane clipped the tail of the United ExpressJet as the aircrafts prepared to take off, according to the FAA. The United Jet had to be towed back to the gate.

“ExpressJet Flight 4226, operating as United Express, from Newark (EWR) to Nashville (BNA) was on the taxiway in EWR when its tail was contacted by another aircraft. All 31 passengers deplaned the aircraft normally and were bussed to the terminal where they are being re-accommodated. ExpressJet is working in coordination with officials to determine the cause,” United ExpressJet officials said in a statement.