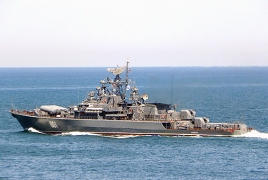 Russian Navy ships in the Mediterranean are ready to evacuate Russian citizens from Syria, Captain Alexei Komarov, commander of a group of Black Sea Fleet landing ships, said upon arrival in Haifa abroad the large landing ship Azov on Wednesday, May 1.

“Russian Navy ships are practicing combat training tasks in the area of Syria. There are ships of the Baltic and Black Sea Fleets there, but they are not engaged in any concrete operations there at the moment. We are standing ready and can evacuate Russian citizens from Syria,” Komarov said.e Azov of the Black Sea Fleet has called in Haifa for three days on the occasion of VE Day traditionally celebrated on May 9.

Various expert estimates put the Russian diaspora in Syria at anywhere between 5,000 and 100,000, the majority of them women who married into Syrian families. Russia evacuated 77 of its citizens by bus in January.