A Palestinian militant killed in an Israeli air strike on Gaza 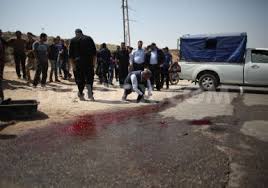 A Palestinian militant has been killed in an Israeli air strike on Gaza City.

Haytham al-Mishal, 29, was hit while riding a motorcycle. At least one other person was reportedly also injured.

A militant group which fired rockets at the southern Israeli city of Eilat two weeks ago said Mishal had been one of its members.

It is the first deadly air strike in Gaza since a ceasefire ended eight days of fighting between Israel and militants there in November.

The incident comes after a rise in violence across the Israeli-Gaza border in recent days. Militants have fired several rockets across the border into Israel and Israel has carried out air strikes, with neither causing injuries.

A spokesman for Hamas, which governs Gaza, said it considered the air strike and the killing of Mishal as “a serious violation of the ceasefire”.

An Israeli government official said the ceasefire was “based on mutual quiet”.

“Attacks on Israel from Gaza are a breach of the ceasefire and Israel cannot be expected not to act”.

The Israel Defence Forces (IDF) said Mishal was a weapons expert who had made rockets and bombs for different militant groups.

It said Mishal had been involved in “extensive terror activity against Israeli civilians and IDF soldiers”, including the attack on Eilat, a popular tourist destination on Israel’s southern Red Sea coast.

In that incident, two rockets fired from the Egyptian Sinai by Gaza-based militants landed in open areas, without causing damage or injury.

The Mujahedeen Shura Council said Misshal had been one of its members.

In a statement, Israeli Prime Minister Benjamin Netanyahu said: “Today, we took down one of those involved in the criminal act of firing rockets against the town of Eilat. I had said that we would not sit quietly while this happened, and this is a clear result of our policy.”

Israel and militants in Gaza fought an eight-day war in November, which ended with both sides agreeing to desist from air strikes and rocket attacks.

The truce has largely upheld since then, despite several incidents of cross-border fire.