13 people killed in a powerful bomb that rocked Damascus 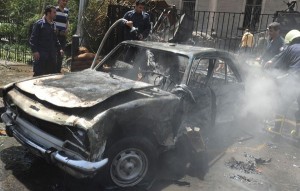 A powerful bomb rocked Damascus on Tuesday, killing 13 people and wounding 70, Syrian state TV reported, a day after the country’s prime minister narrowly escaped an assassination attempt in the heart of the heavily protected capital.

Rebels fighting to topple President Bashar Assad’s regime have increasingly targeted Damascus, the seat of his power. Tuesday’s bombing, the second in as many days in the capital, appears to be part of the wider violence wracking Syria with the nation’s conflict now in its third year.

Damascus residents said they heard a powerful explosion and saw thick, black smoke billowing from behind a group of buildings.

Syrian TV said the explosion was caused by a “terrorist bombing” in the district of Marjeh, a commercial area in central Damascus. Assad’s regime refers to opposition fighters as “terrorists.”

The target of the attack was not immediately clear, although the explosion took place near the Damascus Tower, a 28-floor office building. The former Interior Ministry building is nearby and was damaged in the blast.

Ambulances rushed to the scene and Syrian state TV aired footage of fire trucks in central Marjeh Square and firefighters trying to extinguish a blaze that engulfed several cars and buildings.

A man was seen lying on the ground in a pool of blood while another, apparently wounded, was seen being carried by civilians into a bus.

The Britain-based Syrian Observatory for Human Rights said 14 people were killed and 65 were wounded in Tuesday’s blast. The group, which relies on a network on activists based in Syria, often gives different casualty tolls from the figures released by the government. The discrepancy could not immediately be reconciled.

Local residents said they heard gunfire in the area of the attack immediately after the blast went off around 11:00 a.m. The residents spoke to The Associated Press on condition of anonymity, fearing reprisals from authorities for speaking to reporters.

The explosion underlined the tenuous security in the Syrian capital, just a day after a remotely detonated improvised explosive devise struck Prime Minister Wael al-Halqi’s convoy. The premier escaped the assassination attempt in the capital’s western neighborhood of Mazzeh, and state TV said al-Haliqi was not hurt in the explosion.

But a government official said two people were killed and 11 wounded in the assassination attempt. The official spoke to the AP on condition of anonymity because he was not authorized to give statements to reporters.

The Observatory said Monday’s bombing killed at least five people, including two of al-Halqi’s bodyguards and one of the drivers in his convoy.

The bombings laid bare the vulnerability of Assad’s regime and highlighted an accelerating campaign targeting government officials, from mid-level civil servants to the highest echelons of the Syrian regime.

Syrian conflict began with largely peaceful anti-government protests in March 2011, but has since morphed into a civil war that has killed more than 70,000 people, according to the United Nations.