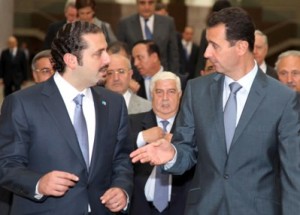 Former Lebanese Prime Minister and Future Movement leader Saad Hariri criticised Hizbullah’s participation in the Syria conflict, saying it was “a crime against Lebanon and the Lebanese […] as well as Syria and its people”.

Hariri also urged the Lebanese not to heed a radical Sunni cleric’s call for jihad in Syria.

Hariri said such calls “contribute, intentionally or unintentionally, to hurling Lebanon into war.”

“I announce my utter refusal of any counter-initiatives [to Hizbullah’s participation in the Syrian war] such as calls for jihad or sectarian-based disturbances whether they take place in Sidon or Tripoli or any other place in Lebanon,” Hariri said in a Tuesday statement.

On Monday, Sheikh Ahmed al-Assir urged his followers to join the fight against the Syrian regime and Hizbullah in Qusayr, Syria, calling it “a religious duty on every Muslim who is able to do so”.

The FSA has repeatedly accused Hizbullah of assisting regime forces in attacking opposition fighters in the Qusayr region near Lebanon’s northern border.

“What is Hizbullah doing on the front with [the Syrian regime]? And if we entertain the theory it is halting attacks by Syrian gunmen, who gave it the authorisation to defend the Lebanese border?” a Hariri statement asked.