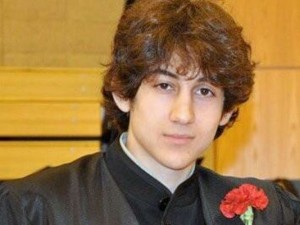 Dzhokhar Tsarnaev, still in serious condition with gunshot wounds, was arraigned in the hospital Monday on federal charges in connection with the Boston Marathon bombings that left 3 people dead and more than 180 injured.

The charges carry the maximum penalty of death.

Among the most damning pieces of information in the 11-page criminal complaint against Tsarnaev, is surveillance camera footage that allegedly captures him slipping the backpack reportedly containing the explosive device off his back and placing it at the location where the second bomb exploded.

According to the complaint, the suspect may have taken a photograph of the backpack after dropping it to the ground and later was seen talking briefly on a cellphone before the first bomb detonated a short distance away.

As attention was drawn in the direction of the initial blast, the suspect appeared “calm” and later walked away from the site where 10 seconds later the second bomb exploded.

Authorities have said that a pressure cooker packed with explosives was used in at least one of the two explosions at the finish line of the annual race in Boston’s Copley Square last Monday.

The FBI searched Tsarnaev’s dorm room Sunday at the University of Massachusetts at Dartmouth and seized BBs, a large pyrotechnic, and “a blackjack and a white hat of the same general appearance as those worn by Bomber Two at the Boston marathon on April 15.”

The complaint also contains a chilling account from the victim of a late Thursday night carjacking in Cambridge, Mass., who said one of the Tsarnaev brothers approached the man’s car and “tapped on the passenger-side window.” When the window rolled down, the suspect opened the door and pointed a firearm at the driver.

“Did you hear about the Boston explosion?” the suspect told the driver. “I did that.” The suspect then allegedly removed the magazine from his gun to display a bullet and re-inserted it, saying: “I am serious.”

One of the suspects, according to owner, also demanded the victim to surrender his ATM card and password. When they stopped at a gas station and the two men left the vehicle, the “victim managed to escape.”

“Although our investigation is ongoing, today’s charges bring a successful end to a tragic week for the city of Boston, and for our country,” said Attorney General Eric Holder. “Our thoughts and prayers remain with each of the bombing victims and brave law enforcement professionals who lost their lives or suffered serious injuries as a result of this week’s senseless violence … We will hold those who are responsible for these heinous acts accountable to the fullest extent of the law.”

Tsarnaev, suffering gunshot wounds to the head, neck, legs and hand, was unable to speak and was answering some of the investigators’ questions in writing from his hospital bed at Beth Israel Deaconess Medical Center.

Tsarnaev, who became a naturalized U.S. citizen in 2012, was arrested Friday night after an intense five-day manhunt that kept Boston-area residents in a tense lockdown.

The other suspect in last Monday’s attacks, Dzhokhar’s 26-year- brother Tamerlan, was killed during a confrontation with police Thursday evening as the pair of suspects were stopped while driving through Watertown in separate cars.

Tamerlan, a legal U.S. resident, suffered gunshot wounds and injuries from detonating a suicide-bomb vest, but may have succumbed to injuries received when Dzhohkar ran over his body as he fled the scene in a carjacked SUV.

If convicted of the most serious terrorist-related charges, Tsarnaev could face the death penalty under federal statutes, although his age could be a mitigating factor in final sentencing.

Investigators initially chose not to read Tsarnaev his Miranda rights against self-incrimination, opting instead for a rare public safety exception in questioning him. Such exceptions are permitted if there is a need to protect the public from immediate danger.

ACLU Executive Director Anthony Romero says the exception applies only when there’s a continued threat to public safety and is “not an open-ended exception” to the Miranda rule.

“He will not be treated as an enemy combatant,” Carney said. “We will prosecute this terrorist through civilian system of justice. Under U.S. law, United States citizens cannot be tried in military commissions. It is important to remember since 9/11, we have used the federal court system to convict and incarcerate hundreds of terrorists.”

Carney noted that the federal courts have been used as the venues for the prosecution of Faisal Shahzad, the Pakistani-American citizen for the failed May 2010 Times Square car bombing and Umar Farouk Abdulmutallab, the Nigerian man known as the “underwear bomber” who tried to blow up a Detroit-bound flight on Christmas Day 2009.

He added, “The system has repeatedly proven it can successfully handle the threat we continue to face.”

The latest turn in this case comes on a day when U.S. lawmakers raised questions about whether authorities missed warning signs about the immigrant brothers — and as Boston regained a semblance of normalcy nearly a week after the horrific attack.

Reps. Michael McCaul, R-Texas, chairman of the House Homeland Security Committee, and Pete King, R-N.Y., said Sunday that they want federal officials to explain why the elder brother was not pursued further after he was questioned by authorities in 2011.

The Russian government had asked for an investigation of Tamerlan Tsarnaev, who died in a shootout Friday, out of concern that he had ties to militant separatist groups in southern Russia.

McCaul and King noted in a letter to the heads of the FBI, Department of Homeland Security and the Office of the Director National Intelligence that the Boston bombings marks the fifth time in recent years that someone under FBI investigation has gone on to be involved in a terrorist attack. Other suspects that the FBI have questioned — but not detained — that have gone on to take part in violence include U.S.-born cleric Anwar al-Awlaki, who would become al-Qaeda in the Arabian Peninsula’s chief propagandist, and Nidal Hasan, the U.S. Army major charged with killing 13 people in 2009 at Fort Hood in Texas.

“They raise the most serious questions about the efficacy of federal counterterrorism efforts,” McCaul and King wrote.

In addition, Sen. Lindsey Graham, Republican of South Carolina, said Monday that a misspelling of Tamerlan Tsarnaev’s name allowed his 2012 trip to Russia to go undetected by the FBI.

Graham said the suspect’s six-month trip to Russia “never went into the system,” despite warnings from Russia to the United that about Tsarnaev’s radical Islamic leanings.

“He went over to Russia, but apparently when he got on the airplane, they misspelled his name, so it never went into the system that he actually went to Russia,” Graham said during an appearance on Fox News, as quoted by Politico. Graham indicated that he got the information after speaking with FBI’s assistant director.

At no time prior to the bombing were Tamerlan Tsarnaev and his brother, Dzhokhar — among the thousands contained on government watch lists — seen as potential terror suspects.

Referring to the 1999 Colorado high school shooting that involved two young attackers, Mudd said the Boston case similarly involves attackers armed with commonly available weapons and explosives who worked in a “closed cluster” that is most difficult for law enforcement to penetrate in advance.

Though authorities continue to search for possible broader international connections, Mudd said key aspects of the operation — the acquisition of widely available materials, the absence of an apparent escape plan, little attempt to conceal themselves and the apparent lack of major funding — all point to a more self-contained plot.

“These guys didn’t even bother to obscure their faces,” Mudd said.

Authorities are also trying to figure how and when the suspects may have been radicalized. While family members have said Tamerlan Tsarnaev had trouble adjusting to life in the USA, his brother, by all accounts, was popular and acclimated in Boston.

The suspect’s uncle, Ruslan Tsarni, recalled in an interview with WUSA-TV in Washington that he had a falling out with Tamerlan Tsarnaev in 2009 after the young man spoke about “not … having a sense in life” and that he believed his actions should be dictated by “God’s will.”

The two brother’s activity on the Internet also suggest they had developed an interest in radical Islamist figures some time ago.

In August 2012, soon after authorities believe he returned from a six-month visit to Russia, the elder Tsarnaev created a YouTube channel with links to a number of videos with ties to radical Islamist causes. One features the firebrand Australian cleric Feiz Mohammed.

A militant group in war-torn Chechnya — Mujahideen of the Caucasus Emirate Province of Dagestan — took the step of issuing a statement on Sunday to disassociate itself with the Boston bombing suspects.

Dzhokhar Tsarnaev was active on Twitter, where most of his postings appeared to be innocent messages to friends. But the SITE Intelligence group, which monitors Islamist websites, notes that he followed someone with the account “Al_firdausiA,” which translates to “the highest level of Paradise, Allah willing.” Among that user’s tweets was a message encouraging readers to listen to an audio series by the late radical terrorist Awlaki.

Photo: Dzhokhar Tsarnaev, poses for a photo after graduating from Cambridge Rindge and Latin High School. He has been charged with using a weapon of mass destruction.(Photo: Robin Young via AP)