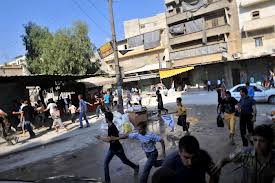 Syria’s state-run media and opposition activists are reporting heavy clashes in the strategic central province of Homs near the border with Lebanon.

The SANA news agency says four key villages — Qadesh, Mansouriah, Saadiyah and Radwaniyah — have fallen under government control on Saturday. The villages are close to the contested town of Qusair.

The Britain-based Syrian Observatory for Human Rights says there are casualties on both sides in the fighting in the area, which has been engulfed in clashes for the past two weeks.

Regime troops last week captured a hill overlooking several towns in the area and the highway linking the capital, Damascus, with the Mediterranean coast.

On Thursday, government forces captured a town in the province and rebels seized a military base in the area.

Meanwhile, At least 69 people, many of them rebels, have been killed in a four-day battle pitting Syrian insurgents against government forces in Jdaidet Al Fadl near Damascus, a monitoring group said on Saturday.

“Regime troops are trying to seize total control of the town of Jdaidet Al Fadl,” southwest of Damascus, the Syrian Observatory for Human Rights said.

“Sixty-nine people were killed in violence raging there over the past four days,” added the Britain-based watchdog, citing activists on the ground, who said many were killed in shelling and also in summary executions by the army.

Violence also raged in Sunni areas of the nearby majority Christian town of Jdaidet Artuz.

The two towns are near Daraya, the scene of fierce fighting for several months.

“Daraya was subjected to tank and rocket fire, and fresh clashes broke out in the morning on the southern and western fronts,” the town’s opposition local council said in a statement.

It added that regime troops had deployed reinforcements including “30 tanks and military vehicles” to the town.

Since last year, the army has tried to root out rebels positioned southwest and east of Damascus, in a bid to secure the capital.

Elsewhere, a woman and three children were killed in army shelling of Kharita town in the eastern province of Deir Al Zor, said the Observatory.

And in the central province of Homs, regime troops took control of Radwaniyeh village near the flashpoint rebel town of Qusayr, said the group.

Fierce firefights between insurgents and regime troops, pro-regime militiamen and fighters loyal to Lebanese Shiite group Hezbollah were also reported in several areas around Qusayr near the border with Lebanon, it added.

Saturday’s violence comes a day after at least 157 people were killed across Syria, said the Observatory, breaking the toll down to 75 civilians, 44 rebels and 38 soldiers.