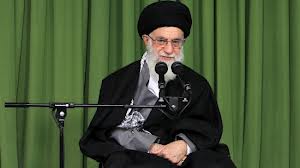 According to the news agency, Nasrallah held talks with senior Iranian officials during his visit to Tehran, where he met with Khamenei.

It pointed out that the “secret” visit was held two weeks ago.

Sources rejected in comments to the news agency to reveal the nature of the meetings held by Nasrallah or the details of his visit.

The news agency also reported that Nasrallah will have a televised appearance on May 9 on the occasion of the 25th anniversary of the establishment of Hizbullah’s al-Nour radio station.

Nasrallah’s last televised speech was on February 27 to deny rumors that he had been transferred to Iran for treatment after falling ill.

Iran, Syria and their ally Hizullah are considered as the “axis of resistance” in the region.

Media reports said that Iran and Hizbullah have played a role in supporting President Bashar Assad’s regime against the rebels since the outbreak of the revolt in March 2011.