UNHRC: Nearly a half million Syrian refugees in Lebanon 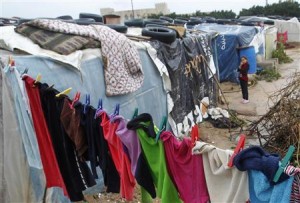 About 428, 000 Syrian refugees have fled their war-torn country to Lebanon, the UN Higher Refugees Council (UNHRC) has said in its latest report.

These refugees are being given aid by the UN agencies and Lebanese government, it adds.

The number of Syrian refugees, registered so far with the agency ‘s offices in Lebanon is 302,000, and there are more than 125,000, still waiting to complete their registration process, reported Xinhua citing UNHRC’s report.

In January, Lebanon appealed for $370 million from Arab countries to help it meet the Syrian refugee influx which has threatened to bring the number of the displaced to 420,000 in June.

The number of refugees in Lebanon has surpassed 10 percent of its population and is causing a huge burden on the state and people of Lebanon, said United Nations Higher Commissioner for Refugees Antonio Guterres.