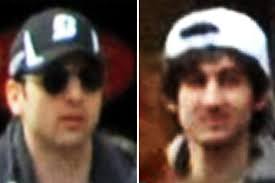 WATERTOWN, Mass. – With the city virtually paralyzed, thousands of officers with rifles and armored vehicles swarmed the streets in and around Boston on Friday, hunting for a 19-year-old college student wanted in the Boston Marathon bombing after his older brother and alleged accomplice was killed in a furious getaway attempt overnight.

During the long night of violence, the brothers killed an MIT police officer, severely wounded another lawman and hurled explosives at police in a car chase and gun battle.

The suspects were identified by law enforcement officials and family members as Dzhokhar and Tamerlan Tsarnaev, ethnic Chechen brothers who had lived in Dagestan, which neighbors Chechnya in southern Russia. They had been in the U.S. for about a decade, an uncle said. Their last known address was in Cambridge, Mass.

Tamerlan Tsarnaev, a 26-year-old who had been known to the FBI as Suspect No. 1 and was seen in surveillance footage in a black baseball cap, was killed overnight, officials said. His brother, a 19-year-old college student who was dubbed Suspect No. 2 and was seen wearing a white, backward baseball cap in the images from Monday’s deadly bombing at the marathon finish line – escaped.

Their uncle in Maryland, Ruslan Tsarni, pleaded on live television: “Dzhokhar, if you are alive, turn yourself in and ask for forgiveness.”

Authorities in Boston suspended all mass transit and warned close to 1 million people in the entire city and some of its suburbs to stay indoors as the hunt for Suspect No. 2 went on. Businesses were asked not to open. People waiting at bus and subway stops were told to go home.

The bombings on Monday killed three people and wounded more than 180 others, tearing off limbs in a spray of shrapnel and instantly raising the specter of another terrorist attack on U.S. soil.

Chechnya is the home of an Islamic insurgency that has carried out deadly bombings in Russia and the region, but its militants have never been known to export violence to the West.

Investigators in the Boston case have shed no light on the motive for the bombing and have said it is unclear whether it was the work of domestic or international terrorists or someone else entirely with an unknown agenda.

As officers fanned out across the Boston area, Bryce Acosta, 24, came out of his Cambridge home with his hands up.

“I had like 30 FBI guys come storm my house with assault rifles,” he said. They yelled, “Is anybody in there?” and began searching his house and an adjacent shed, leaving after about 10 minutes.

The endgame – at least for Suspect No. 1 – came just hours after the FBI released photos and video of the two young men at the finish line and appealed to the public for help in identifying and capturing them.

State Police spokesman Dave Procopio said police realized they were dealing with the bombing suspects based on what the two men told a carjacking victim during their getaway attempt overnight.

Tsarni, the men’s uncle, told The Associated Press that the brothers traveled here together from Russia. He called his nephews “losers” and said they had struggled to settle themselves in the U.S. and ended up “thereby just hating everyone.”

Tamerlan Tsarnaev had studied accounting as a part-time student at Bunker Hill Community College in Boston for three semesters from 2006 to 2008, the school said. U.S. government officials, speaking on condition of anonymity because they were not allowed to talk about an investigation in progress, said that he Tsarnaev traveled to Russia last year and returned to the U.S. six months later.

Dzhokhar Tsarnaev was registered as a student at the University of Massachusetts Dartmouth, the school said. The campus closed down along with colleges around the Boston area as the search unfolded.

Their father, Anzor Tsarnaev, said in a telephone interview with The Associated Press from the Russian city of Makhachkala that his younger son, Dzhokhar, is “a true angel.” He said his son was studying medicine.

“He is such an intelligent boy. We expected him to come on holidays here,” the father said.

The city of Cambridge announced two years ago that it had awarded a $2,500 scholarship to Dzhokar Tsarnaev, who was listed as a senior at Cambridge Rindge & Latin School, a highly regarded public school whose alumni include Matt Damon, Ben Affleck and NBA star Patrick Ewing.

The images released by the FBI depict the two young men walking one behind the other near the marathon’s finish line. Richard DesLauriers, FBI agent in charge in Boston, said Suspect No. 2 in the white hat was seen setting down a bag at the site of the second of two deadly explosions.

The long night of crime began between 7:30 and 8 p.m. Thursday, when the brothers robbed a 7-Eleven convenience store in Cambridge, near the campus of the Massachusetts Institute of Technology, and shot to death an MIT police officer, 26-year-old Sean Collier, while he was responding to a report of a disturbance, investigators said.

From there, authorities said, the two men carjacked a man in a Mercedes-Benz, keeping him with them in the car for half an hour before releasing him at a gas station in Cambridge. The man was not injured.

The search for the vehicle led to a chase that ended in Watertown, where authorities said the suspects threw explosive devices from the car and exchanged gunfire with police. A transit police officer was severely wounded, authorities said.

Doctors at a Boston hospital where Tamerlan Tsarnaev died said they treated a man with a possible blast injury and multiple gunshot wounds. Authorities gave no details on how his younger brother escaped.

Watertown resident Kayla Dipaolo, 25, was waiting for a bus that was to evacuate her and others from their neighborhood.

She said she was woken up overnight by gunfire and a large explosion that sounded “like it was right next to my head … and shook the whole house.” She was looking at the front door when a bullet came through the side paneling. SWAT team officers were running all over her yard, she said.

“It was very scary,” she said. “There are two bullet holes in the side of my house and by the front door there is another.”

Christine Yajko said she heard two loud explosions and gunfire. She said a police officer later knocked on her door and told her there was an undetonated improvised explosive device in the street and warned her to stay away from the windows.

“It was on the street, right near our kitchen window,” she said.

The brothers also started out the night in a Honda CRV and used it to carjack the Mercedes, investigators said. The CRV was later found abandoned in the morning in Boston.

Insurgents from Chechnya and neighboring restive provinces in the Caucasus have been involved in terror attacks in Moscow and other places in Russia.

In 2002, a group of Chechen militants took 800 people hostage in Moscow and held them for two days before special forces stormed the building, killing all 41 captors. Also killed were 129 hostages, mostly from the effects of the gas Russian forces used to subdue the attackers.

Chechen insurgents also launched a 2004 raid in the southern Russian town of Beslan and took hundreds of hostages. The siege ended in a bloodbath two days later, with more than 330 people, about half of them children, killed.