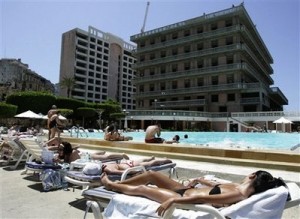 A new Lebanese government’s best hope of rebooting its battered economy may lie in efforts to persuade wealthy Gulf Arab tourists to return after a boycott last year, but it is a gargantuan task.

Flooded with 400,000 refugees from a Syrian conflict that regularly leaks over the border into the north of the Mediterranean nation, Lebanon saw four of the Gulf’s oil-rich states tell nationals to stay away in 2012.

The war in Syria has also shut off a highway that used to bring 300,000 tourists annually into the country, famous for its beaches, mountains and fine food, helping slash tourist numbers from the Gulf by 80 percent.

But many in Lebanon believe that the boycott was more to do with the opposition to its last government from Saudi Arabia and caretaker tourist minister Fadi Abboud sees hope in Prime Minister-designate Tammam Salam’s better ties with Riyadh.

“I believe that the political reasons for the (Gulf) boycott have disappeared,” Abboud, who is continuing his role until Salam forms his new government, told Reuters.

Tourism in the Mediterranean nation accounts for around 15 percent of GDP but visitor numbers fell by 17 percent last year, helping slash overall economic growth to around 2 percent from 5.2 percent a year earlier.

Abboud said around 1.5 million tourists visited Lebanon last year, down from a high of just over 2 million in 2010 before the outbreak of the conflict in Syria which has killed at least 70,000 people according to the United Nations.

So far this year visitor numbers are already down by 8 percent, suggesting Abboud’s hopes of seeing numbers back above 2 million this year are unlikely to be met.

Gulf Arabs are drawn to Lebanon by its cooler climate and a more liberal atmosphere than the neighbouring desert states but governments encouraged their nationals to stay away last summer after violence in the northern city of Tripoli and a spate of kidnappings.

But the conflict in Syria has also cut all land routes from the Gulf to Lebanon, whose only other border – with Israel – remains a hostile frontline.

Violence has also spilled over the border, with rocket fire killing Lebanese residents of the Bekaa Valley and dozens of people killed in sporadic street fighting in Tripoli. In October Lebanon’s security chief was assassinated by a powerful car bomb in the capital Beirut.

But despite the security challenges, Abboud said Lebanon still hoped to draw visitors from across the world.

“We have new and promising markets, including Russia and South America. I think they are all promising. If the security situation is good we will have a better year than last,” he says.