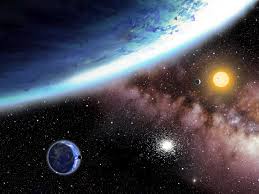 NASA’s planet-hunting telescope has discovered two planets that seem like ideal places for some sort of life to flourish. They are just the right size and in just the right place near their star.

The distant duo are the best candidates for habitable planets that astronomers have found so far, said William Borucki, the chief scientist for NASA’s Kepler telescope.

The discoveries, published online Thursday in the journal Science, mark a milestone in the search for planets where life could exist.

In the past when astronomers found exoplanets — planets outside our solar system — they have not fit all the criteria that would make them right for life. Many planets are not in the habitable zone — where it’s not too hot and not too cold for liquid water. And until now, the handful of planets astronomers found in that ideal zone, were just too big. Those are likely to be gas balls like Neptune and that’s not suitable for life.

Similarly, the Earth-size planets that had been found weren’t in the right place near their stars, Borucki said.

In the Goldilocks game of looking for other planets like ours, the new discoveries, called Kepler-62-e and Kepler-62-f are just right. And they are fraternal twins. They circle the same star, an orange dwarf, and are next to each other — closer together than Earth and its neighbor Mars.

The planets are slightly wider than Earth, but not too big. Kepler-62-e is a bit warm, like a Hawaiian world and Kepler-62-f is a bit chilly, more Alaskan, Borucki said.

“This is the first one where I’m thinking ‘Huh, Kepler-62-f really might have life on it’,” said study co-author David Charbonneau of Harvard. “This is a very important barrier that’s been crossed. Why wouldn’t it have life?”

Both planets are tantalizing. The dozens of researchers who co-authored the study disagree on which one is better suited to life. Lisa Kaltenegger of the Max Planck Institute of Astronomy in Germany likes Kepler-62-3 more because it’s closer to the star and is warmer. She said it is probably “like Washington in May.”

The planets are 1,200 light years away. A light year is almost 6 trillion miles (nearly 10 trillion kilometers).

“If there’s life at all on those planets, it must be very advanced,” said Borucki.