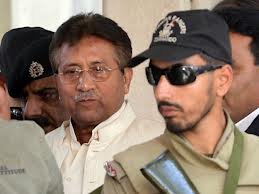 Former Pakistani military ruler Pervez Musharraf fled court in a speeding vehicle Thursday to avoid arrest after his bail was revoked in a case involving his decision to fire senior judges while in power over five years ago.

The harried escape broadcast live on Pakistani TV marked a new low in Musharraf’s troubled return from exile last month to seek a political comeback in the May 11 parliamentary election.

Musharraf made his exit with the help of bodyguards, who pushed him past policemen and paramilitary soldiers and helped him into a black SUV that sped off with a member of his security team hanging on the side of the vehicle. Lawyers taunted the 69-year-old as he roared away, yelling, “Look who is running! Musharraf is running!”

The car carrying the former military strongman dashed to his luxury farmhouse, which is protected by high walls, razor wire and guard towers. Dozens of police and elite commandos blocked the main road that runs to the compound on the outskirts of Islamabad, keeping a crowd of journalists and onlookers at bay. About 20 Musharraf supporters held banners and shouted slogans.

None of the security forces protecting the compound made any move to arrest Musharraf, likely because they were awaiting orders from senior officials trying to figure out how to deal with a delicate situation. Musharraf’s legal team said they would appeal the arrest warrant in the Supreme Court.

“A lot of people are going to demand to know why he escaped the custody of the security forces,” said Rasul Baksh Rais, a political science professor at Lahore University of Management Sciences.

Pakistan’s government seems reluctant to wade into the controversy surrounding Musharraf, especially given his connection to the army, considered the most powerful institution in the country.

Musharraf seized power in a coup in 1999 when he was serving as army chief and spent nearly a decade in power before being forced to step down in 2008. He returned last month after four years in self-imposed exile in London and Dubai despite legal challenges and Taliban death threats.

He has received paltry public support, and earlier this week was disqualified from running in the coming election because of his actions while in power. A court has also barred him from leaving the country.

The upcoming vote is historic because it will mark the first time in Pakistan that parliament has completed its full five-year term and handed over power in democratic elections. The country has experienced three military coups and constant political instability since it was founded in 1947.

The court order to arrest Musharraf and his decision to flee puts the current army chief, Gen. Ashfaq Parvez Kayani, in an awkward position. There have been calls for paramilitary soldiers protecting Musharraf to arrest him. That could force Kayani to decide whether to protect a former army chief or respect judges who have shown an increasing willingness to go after senior military and civilian officials.

If Musharraf were sent to prison, it would be the first time a Pakistani army chief has been put behind bars.

“General Musharraf’s act today underscores his disregard for due legal process and indicates his assumption that as a former army chief and military dictator he can evade accountability for abuses,” the head of Human Rights Watch in Pakistan, Ali Dayan Hasan, said in a statement. “Continued military protection for General Musharraf will make a mockery of claims that Pakistan’s armed forces support the rule of law and bring the military further disrepute that it can ill afford.”

A spokeswoman for Musharraf, Aasia Ishaq, said officials in Islamabad planned to declare his house a jail, which is allowed under the country’s law. That would mean Musharraf was effectively under house arrest, and could solve Kayani’s dilemma for the time being.

But a police official in the area where Musharraf lives, Mohammed Ijaj, said he had not yet received such an order.

Thursday’s case before the Islamabad High Court involved Musharraf’s decision to dismiss senior judges, including the chief justice of the Supreme Court, when he declared a state of emergency and suspended the constitution in 2007. He was concerned the judges would challenge his recent re-election as president, and cited the growing Taliban insurgency in the country as justification for the state of emergency.

The man who filed the petition before the Islamabad High Court, Aslam Ghuman, also accused Musharraf of placing the judges under house arrest.

Musharraf’s spokeswoman, Ishaq, denied he issued an arrest order, even though the judges were clearly confined to their homes. Government officials at the time claimed they restricted the movement of the judges for their own security.

Musharraf’s crackdown on the judges outraged many Pakistanis, and fueled a nationwide protest movement by lawyers that eventually resulted in him stepping down under the threat of impeachment.

Before he returned to the country nearly a month ago, Musharraf was granted bail for the judges’ case and two others, meaning he could not be arrested when he landed — a feature of Pakistan’s legal system. But the bail agreement was temporary.

An Islamabad High Court judge, Shaukat Aziz Siddiqui, who had extended the bail agreement once on April 12, refused to do so again Thursday and ordered Musharraf’s arrest, according to a copy of the court order. The judge ordered Musharraf to be investigated under an anti-terrorism law, which does not allow bail, the order said.

Many policemen and paramilitary soldiers were on duty at the court, but they seemed caught off-guard and nobody appeared to try to prevent Musharraf from leaving as he pushed past them.

The judge ordered the Islamabad police chief to appear before the court on Friday to explain why Musharraf was not arrested and to ensure action is taken against policemen “who remained napping” instead of performing their duties.

Musharraf’s spokeswoman, Ishaq, said the judge was “biased,” claiming he participated in the protests against Musharraf when he was in power. Musharraf’s legal team will file an appeal with the Supreme Court on Friday, said Ishaq.

Musharraf is facing a raft of other legal challenges, including allegations before the Supreme Court that he committed treason while in power. He also faces legal charges in two other cases. One involves allegations that Musharraf didn’t provide adequate security to former Prime Minister Benazir Bhutto, who was killed in a gun and suicide attack in 2007. The other relates to the death of a nationalist leader in Baluchistan in 2006.

Given the legal challenges and Taliban threats against Musharraf, many experts have been left scratching their heads as to why he returned. Some have speculated he misjudged the level of public backing he would get, while others suggested he was simply homesick.

Musharraf released a video message online late Thursday saying he had done great things for the country and asking, “Why am I being stopped from taking part in politics?”