Formula 1 event at the epicenter of protests in Bahrain 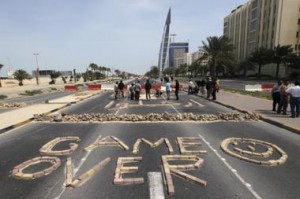 Protesters in Bahrain plan to step up demands for reform ahead of this weekend’s Formula One Grand Prix, setting the scene for a showdown with authorities determined to stage an incident-free race.

The main opposition al-Wefaq political bloc has called for a massive rally to coincide with free practice on Friday, the same day the radical February 14 Movement has urged youths to protest under the slogan “Volcano of Anger”.

The Shiite al-Wefaq is to protest under the banner “Democracy is Our Right”.

“We are not against the Formula One Grand Prix, but we want the world to hear our demands — democracy, respect of human rights, and an elected government,” said leading al-Wefaq figure Khalil al-Marzooq.

Marzooq, speaking to Agence France Presse on the telephone, distanced his movement from the violence that the February 14 Movement frequently resorts to.

But he accused the security forces in the tiny Gulf archipelago of “suppressing the people like they were enemies,” adding that “violence leads to violence”.

Late on Tuesday, youths took to the streets across Shiite-populated villages, sounding drums and chanting: “No to the Formula of blood,” in reference to the three-day event.

The protesters carried pictures of Formula One supremo Bernie Ecclestone, his face marked with a X.

Ecclestone has said he sees “no reason” why the Bahrain race should not be successful.

“There’s no reason why it shouldn’t be,” Ecclestone told AFP at last weekend’s Grand Prix in Shanghai, China.

Sunni-ruled Bahrain has vowed to take “appropriate” security measures ahead of the Grand Prix in the Shiite-majority Gulf state.

Government spokeswoman Samira Rajab said that “Bahrain is ready to host the F1 and there are no security issues,” dismissing the protests as “childish movements implementing Iranian agendas… that will not affect the race.”

She said hotel occupancy rates “will reach 100 percent based on the bookings made until now”.

“The teams are here now and tourists are in their thousands.”

Checkpoints have been set up at major intersections, especially on roads leading to the Sakhir race circuit and Manama’s financial center, where a bomb exploded late Sunday in an attack claimed by February 14. It caused no harm.

Police have been rounding up pro-democracy activists in an attempt to head off protests over the hosting of the race.

“More than 100 people have so far been arrested,” said Marzooq.

On Wednesday, Amnesty International accused Bahrain of “trying to use the Grand Prix as a platform to show progress, with claims that the human rights situation has improved, whilst stepping up repression in order to ensure nothing disturbs their public image”.

It urged Bahrain to “immediately release all prisoners of conscience, let demonstrators exercise their rights peacefully and allow unrestricted access to NGOs and journalists to monitor the situation around the Grand Prix”.

Bahrain was rocked by month-long pro-democracy protests led by the kingdom’s Shiites in early 2011 that were crushed with the help of troops from Sunni-ruled Saudi Arabia.

The race was canceled that year but went ahead in 2012.

Home to the U.S. Fifth Fleet and strategically situated across the Gulf from Shiite-ruled Iran, Bahrain has continued to witness sporadic demonstrations, now mostly outside the capital.

A new round of dialogue between the opposition and the government began in February against the backdrop of protests launched around the second anniversary of the uprising.

But the talks have been dogged by disagreement due what the opposition describes as a “lack of will for reform” by the government.

Human rights groups say a total of 80 people have been killed in the unrest in Bahrain since February 2011.