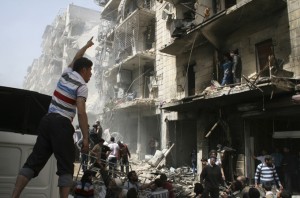 Syrian government warplanes have carried out airstrikes on a rebel-aligned neighbourhood of the capital, Damascus, as well as a village in the country’s northeast, killing at least 25 people, including 12 children, activists have said.

On Sunday, government jets bombed rebel-held areas in the predominantly Kurdish village of Hadad in the northeastern province of Hassaka, according to the Britain-based Syrian Observatory for Human Rights.

It said at least 16 people were killed, including two women and three children.

A Hassaka-based activist who was in Hadad when the planes struck said the bombs sent huge plumes of black smoke billowing over the town. He spoke on condition that he be identified only by his nickname of Abu Qasem – by which he is widely known among his comrades – out of fear of reprisals.

Another airstrike on the Damascus neighbourhood of Qaboun killed at least nine children, the Observatory said.

With its ground forces stretched thin, President Bashar al-Assad’s regime has relied heavily on its fighter jets and helicopters to try to stem rebel advances in the country’s civil war.

The government frequently targets Qaboun, where rebels pushed in early this year. The district has been ravaged by heavy street clashes and shelling since then as the military has tried to expel the anti-Assad fighters.

The Observatory, which relies on a network of activists on the ground, also reported that four civilians died after being tortured in a jail in the town of Zakyeh. It did not provide any further details.

In the southern city of Deraa, the Syrian army shot and killed a man, the Observatory said.

Fighting has spilled over on several occasions into neighbouring states, including Lebanon, Turkey and Israel, stoking fears that those countries could be dragged into the conflict.

On Sunday, two rockets fired from Syria exploded in the Lebanese border village of al-Qasr, killing one person and wounding two, a Lebanese security official said on condition of anonymity because he was not authorised to brief reporters.

Two more rockets landed a nearby village of Hawsh, but there were no reports of casualties.

There has been heavy fighting near the frontier in recent days as Syrian government troops try to regain control of the strategic area from rebels.

In a statement, the Syrian National Coalition urged Jabhat al-Nusra, one of the most powerful and effective rebel groups, “to stay within the ranks of nationalistic Syrians, to continue its efforts in fighting the Assad regime, and in supporting and protecting the freedom of all Syrian sects”.

Jabhat al-Nusra’s pledge of fealty sparked concern that the allegiance to al-Qaeda meant the group would be beholden to non-Syrian interests.

But the broader rebellion desperately needs the extremist group’s fighting skills in its battle to topple Assad. Al-Nusra itself has sought to ease concerns by saying it remains dedicated to the Syrian uprising’s cause of toppling the Assad regime.

Meanwhile, in the northern province of Aleppo, three journalists working for state TV were wounded in a car bombing on Sunday, the SANA state news agency said.