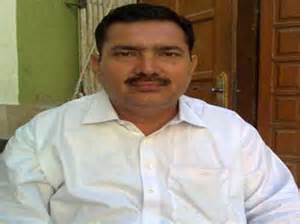 A candidate of the Muttahida Qaumi Movement (MQM), Fakhrul Islam, was killed on Thursday by unknown motorcyclists here near Hala Naka, spreading panic in the city.

He was the party’s candidate from two constituencies of the city, PS-47 and NA 221.The deceased candidate was a goods transporter and resident of Malika Nagar Colony, adjacent to Hala Naka. He was as usual on the way to his office, located at walking distance from his residence, when unknown motorcyclists opened fire, killing him on the spot.

He received four bullets in his chest and head. MQM Hyderabad Zonal Deputy In-charge Iftekhar Qaimkhani termed the incident as a targeted killing, saying there is no other reason because the victim was known in the entire area as welcoming and helpful to the people.

The president, expressing profound grief and sorrow over the unfortunate incident, directed the concerned authorities to bring the culprits to justice at the earliest. He expressed sympathies with the bereaved family and prayed for the departed soul.

The prime minister directed the authorities to submit report over it within 24 hours.He issued instructions that the security of all candidates participating in the general elections should be beefed up to ensure that such incidents should not occur.

He reiterated the resolve of the caretaker government to hold elections on time and make all necessary arrangements ensuring a conducive environment.Agencies add: Officials say Taliban gunmen on a motorcycle killed the MQM candidate.

Qamar Mansoor, a spokesman for the MQM, says Islam was running for the provincial Sindh assembly in elections on May 11.Taliban spokesman Ahsanullah Ahsan claimed responsibility for the shooting. The Taliban have threatened to attack members of the MQM because the party has spoken out for civic liberties.

“He sustained four bullets in his head and abdomen and died on the spot,” police official Akhtar Hussain told AFP.Islam’s father was not injured, but police said he was in “deep shock”.

Local officials said the killing had the signature of Islamist militants.The killing is likely to fuel concerns that violence will mar the national and regional elections on May 11.The polls will mark the first democratic transition in the nuclear-armed country, which has been subject to extended periods of military rule.

The MQM said Islam had been targeted deliberately and accused “terrorists” of trying to sabotage a peaceful democratic process.“The way he has been killed and his father remained unhurt shows the precision the killers have and also their intention to target him in particular,” said party spokesman Wasay Jalil.

“Terrorists are threatening to sabotage elections… but these terror acts will not deter us from taking part in elections and our stance against extremism and terrorism,” he added.