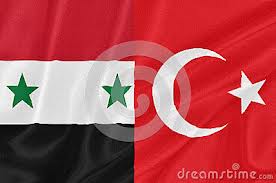 Syria’s economy and trade ministry plans to set up an office tasked with overseeing a boycott of Turkish industry, which has contributed to “sabotaging the national economy” an official said Thursday.

“Those factories that have contributed to sabotaging Syria’s national economy and looting factories in Aleppo and its province… do not deserve to be dealt with as legal entities,” Deputy Minister of Economy Abdel Salam Ali told AFP.

“Those factories will be put on a blacklist and prohibited from operating and investing in Syria,” Ali said, adding that a special office tasked with boycotting Turkish industry is being created.

However, he also said that Syria is “committed to good relations with the Turkish people”.

Last month, Syria’s industry body filed a case in a European court against the Turkish government for allegedly sponsoring “terrorism” and looting factories in Syria.

Once allied to President Bashar al-Assad’s regime, Ankara broke ties with Damascus to support the revolt that erupted in March 2011.

Turkey currently hosts some 200,000 Syrian refugees who fled the fighting in their home country.