Use of Car Bombs Angers Both Sides in Syrian Conflict 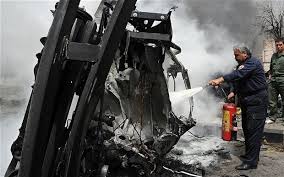 Jayda al-Kanna, 65, was cooking in her kitchen across from the Syrian Central Bank on Monday afternoon, a dish towel slung around her neck. Downstairs, children packed the Salim Bukhari primary school, and older students studied drawing at a technical school in the same building.

Without warning, an explosion shook the street, blasting a six-foot hole in Ms. Kanna’s living room wall, shattering the schools’ windows onto their students and blowing in the doors. Cars, body parts and broken glass flew through the air. Black smoke billowed.

The attack, witnesses and the government authorities said, was the latest of dozens of car bombs to rip through Syrian business districts and neighborhoods during the country’s two-year war. It again turned a wary but busy downtown commercial area into a scene of terror and chaos. The Syrian government blamed its opponents for Monday’s attack and said it had killed at least 15 people and wounded at least 53.

The proliferation of car bombs across Syria has frightened and enraged many on both sides in this battle, government supporters and opponents alike. The use of these powerful and indiscriminate weapons — rejected by some rebel factions — has undermined support for the uprising against President Bashar al-Assad and left many Syrians angry at the government for failing to stop the bombings.

In Damascus, the Syrian capital, on Monday, some residents blamed the United States and its allies, which back the opposition, for the devastation.

A half-hour after the bombing, a drawing teacher, her hand bandaged, wept as she picked her way past bloodstains and shattered furniture inside what was left of the technical school.

“I was going to open the door, and it fell on me,” she said shakily, giving only her first name, Hanan. “Many students were injured.”

A man with her prevented her from talking and shouted: “This is America, Jordan, Qatar, Saudi Arabia! They are funding those people to do those explosions!”

In December 2011, when car bombs began hitting government security buildings — and killing civilians nearby — government supporters and opponents alike viewed the explosions as an ominous turn in the conflict.

Until then, the fighting had largely pitted rebels with small arms and roadside bombs against the army and security forces. But suddenly, the Syrian capital was witnessing scenes reminiscent of the Iraqi insurgency. Checkpoints and blast walls went up everywhere.

Some in the opposition said they suspected the government of setting the bombs to tarnish the uprising. But one rebel group, the extremist Nusra Front, began claiming responsibility for many of those attacks. That led to one of the first signs of the split in the armed opposition, between those who said they were defending themselves against a violent government crackdown and a minority who called for an Islamic state. And it repulsed some civilian activists who then distanced themselves from the movement.

Now, the Nusra Front has become a major force on the battlefield, leading other rebel groups in more conventional fights. That poses a quandary for the United States, which supports the opposition but rejects the Nusra Front and accuses it of ties to Al Qaeda.

The bombs have killed Syrians of all sects and views. In November, a car bomb hit the Damascus neighborhood of Mezze 86. News media speculated that the neighborhood had been chosen because it includes military families and members of Mr. Assad’s minority Alawite sect.

That characterization infuriated Salah, a graphic designer who lives there. Among the dead, he said in an e-mail interview, were his wife, Amal, and 7-year-old daughter, Hanan.

Salah, 31, who gave only a first name, said he was not an Assad supporter, nor, for that matter, an Alawite, though he stressed that attacking those groups was not justified. The bombing convinced him that Western-backed rebels aimed to destroy Syria because its army is one of the few in the region not “funded, trained and controlled by the United States,” he said.

On Monday, Syria’s prime minister, Wael al-Halqi, trudged through the rubble outside the central bank and told reporters that the bombing — which also damaged a nearby mosque — had been committed by terrorists who “seek to undermine the moderate and compassionate Islam which has been a mainstay of the Syrian people for centuries.”

No group immediately claimed responsibility for the attack, which struck just off the Sabaa Bahrat, or Seven Lakes Square, where a year ago dozens of Assad loyalists rallied and danced the dabke, a traditional line dance. The bomb appeared to have exploded inside the Central Bank’s parking lot, destroying an outer structure and shattering windows of two large office buildings. Inside the bank, trapped employees peered down from a glassless window at mangled, blackened cars, a charred palm tree and swarming emergency workers. A small boy rode his bicycle through the rubble.

A taxi driver whose car windows had been shattered by the blast said he had seen a minibus, like those used to transport government employees, with a lone driver go through the checkpoint into the parking lot and explode.

“People were just sitting here working and doing their daily life, and suddenly this happened,” said a man whose curtain shop’s windows had been blown out.

People streamed away on foot, first in silence, then shouting into cellphones. A small boy clung to his father’s leg. “My daughter was in school, and they attacked the school!” screamed one woman in a bubble-gum-pink head scarf. “May God take them!”

Ms. Kanna, still in her pink housedress with her dish towel around her neck, sat alone in her dining room, where a white china cat sat unscathed on a sideboard. She refused to leave her apartment with emergency workers, though most of her relatives are far away, in Boston and Louisiana. She said she had a habit of biting her forefinger when frightened. This time, she said with a nervous laugh, “I drew blood.”