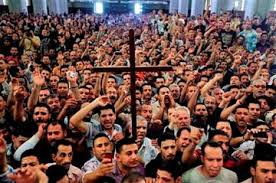 Two more deaths were reported on Monday after sectarian violence at Cairo’s Coptic cathedral that the Egyptian government and Muslim and Christian leaders scrambled to calm.

A security source said a 21-year-old Muslim man, named only as Mohamed, died of a fractured skull in hospital after fighting between local Muslims and Copts who had been attending a funeral for four Christians shot dead in a town near Cairo.

The health ministry said at least 90 people, including 11 policemen, were wounded around the cathedral, seat of the Coptic pope, in one of the worst sectarian flare-ups since the fall of autocratic President Hosni Mubarak in 2011.

Separately, the state news agency MENA said one person was killed and 14 wounded in fresh clashes on Sunday night in the town of El Khusus, north of Cairo, where the latest wave of sectarian strife began on Friday.

Prime Minister Hisham Kandil said the government was taking all measures to protect the safety of Egyptians of all faiths, promising to bring to justice the perpetrators of sectarian attacks and to crack down on unlicensed weapons.

He also spoke to the heads of the Coptic church and of the Islamic al-Azhar institution to discuss ways to resolve the crisis and prevent any repetition, a cabinet statement said.

The violence erupted as Egypt is negotiating with a visiting International Monetary Fund delegation for a loan of at least $4.8 billion to ease a deepening economic crisis aggravated by political and sectarian turmoil that has hit investment and tourism in the Middle East’s most populous nation.

Muslim and Christian religious leaders appeared together on late-night television to call for calm and national unity after the clashes around St. Mark’s Cathedral, headquarters of the Coptic church, which raged for several hours on Sunday.

Witnesses accused the police of standing by as the Copts were attacked and of firing teargas at mourners in the compound as they emerged from the cathedral under a hail of rocks.

A statement posted on the Interior Ministry’s website blamed Christians for starting the trouble by vandalising several cars.

Mursi telephoned Coptic Orthodox Pope Tawadros II on Sunday evening to condemn the violence, telling him that “any attack on the cathedral is like an attack on me personally”.

In a condolence message to the families of the victims, Tawadros said on Monday: “Heavenly justice will be spoken at the appropriate time.”

Christians make up about 10 percent of Egypt’s 84 million people and have complained that the authorities have failed to protect them since Mubarak’s overthrow, giving radical Islamists a free hand.

In a sign of international concern, U.S. Ambassador Ann Patterson welcomed Mursi’s promise of a full and transparent investigation into the violence, but said: “It is the responsibility of the state to protect all of its citizens.”

Samir Morcos, who was the only Christian presidential aide until he resigned in November, told Reuters : “I cannot accept an attack on the cathedral, the symbol of the Coptic church. This has never happened before.”

MENA said police had arrested 30 people for investigation for their roles in the troubles in El Khusus. Five of the detained were accused of possession of weapons.

The Muslim Brotherhood’s spiritual leader, Mohamed Badie, said in a statement on the movement’s website that the attack on Christians in El Khusus was alien to all Egyptians.

He blamed the violence not on Muslim radicals but on unnamed forces seeking to divide Egypt.

“Evidently, there are desperate attempts to subvert our national unity. They will not succeed, God willing,” Badie said.