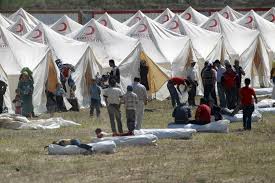 Turkey denied on Thursday it had rounded up and deported hundreds of Syrian refugees following unrest at a border camp, highlighting the strain the exodus from Syria’s civil war is placing on neighboring states.

Witnesses said hundreds of Syrians were bussed to the border after Wednesday’s clashes in which refugees in the Suleymansah camp, near the Turkish town of Akcakale, threw rocks at military police, who fired teargas and water cannon.

The Turkish foreign ministry denied any Syrians had been forcibly expelled, saying around 50-60 people had returned to Syria overnight and that some of them may have been involved in the unrest, but that they left voluntarily.

The United Nations refugee agency UNHCR voiced deep concern at reports of deportations and said it had taken up the issue with Turkey. Such deportations would be against U.N. conventions governing the treatment of refugees.

“There has been a big deportation operation here, they got rid of lots of people. They kicked out two of my boys and three of my brother’s sons. They came for my boys last night and told them to get their bags,” one refugee at the camp told Reuters by telephone, giving her name as Saher.

“Today, a large number of guards came in with shields and they went around the camp forcing people out. I think around 300 families left today,” she said.

One official at the camp said 600-700 people had been deported including those identified from security camera footage as being involved in the violence, along with their families.

“The security forces are still looking at the footage, and if they see more they will deport them,” the official said.

A second Turkish official in the region put the number lower, saying about 400 had been sent home.

“Some people have returned since last night, the numbers are closer to 50 or 60, and yes some of these may have been involved in the provocations from yesterday but they returned of their own free will,” ministry spokesman Levent Gumrukcu said.

Since the revolt in Syria began two years ago, more than 1.2 million Syrians fleeing violence and persecution have registered as refugees or await processing in neighboring countries and North Africa, the UNHCR says. They include 261,635 in Turkey, mostly staying in 17 camps, many of them teeming.

“UNHCR is very concerned with reports of a serious incident and allegations of possible deportations from Akcakale tent city in the past 24 hours,” Melissa Fleming, chief spokeswoman of the U.N. High Commissioner for Refugees (UNHCR), told Reuters.

Its office in Turkey was seeking further information about Wednesday’s incident and the alleged deportations.

Dozens of protesters threw stones and smashed the windows of a fire truck during Wednesday’s unrest.

But a Turkish official said the unrest was triggered when guards turned away around 200 Syrians trying to get into the site, which is already full, home to 35,000 people and one of the largest such camps in Turkey.

Camps in Turkey for the most part have facilities such as electric heaters to protect against freezing temperatures and refugees receive three hot meals a day, better conditions than in camps in some of Syria’s other neighbors.

But overcrowding remains a concern, with ever more refugees arriving as fighting across the border drags on.