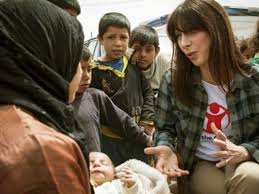 Syrian childhoods are “being smashed to pieces,” said the UK prime minister’s wife following her visit to a Syrian refugee camp in Lebanon on Wednesday.

“As a mother, it is horrifying to hear the harrowing stories from the children I met today. No child should ever experience what they have,” The Guardian quoted Samantha Cameron as saying.

“With every day that passes, more children and parents are being killed, more innocent childhoods are being smashed to pieces,” she added.

Syrian families seeking refuge in Lebanon’s Bekaa Valley told her how they had witnessed the deaths of relatives during the two-year-old civil war.

A 13-year-old told Cameron how she had retrieved her uncle’s body after he was killed in the street in Syria.

A 10-year-old told Cameron how she had witnessed her mother’s death after their home was shelled. The girl’s father is still missing, the British newspaper reported.

Cameron, an ambassador for Save the Children, sought in her visit to raise awareness of children’s plight and encourage charity, The Guardian reported.

“Without more help, and quickly, we risk losing a generation of Syria’s children,” said Justin Forsyth, chief executive of Save the Children, who accompanied Cameron during her visit.