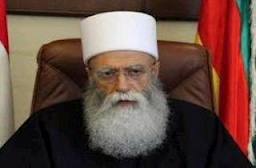 Druze Sheikh Aql Naim Hassan denounced the murder of Druze cleric Sheikh Salman Aharfani as , “the most heinous crime “, and called on the relevant Lebanese authorities to “uncover the circumstances as soon as possible, and bring the perpetrators to justice.”