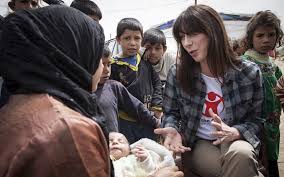 Samantha Cameron, the British Prime Minister’s wife, has visited Syrian refugees in Lebanon with the charity Save the Children to raise awareness of the ordeal faced by the women and children caught up in the conflict.

Innocent childhoods are being “smashed to pieces” by the civil war in Syria, Mrs Cameron said after visiting refugees fleeing the conflict.

The Prime Minister’s wife said she was horrified by stories she heard from those caught up in the violence during her visit to the Bekaa Valley, in the north of Lebanon as an ambassador for Save the Children.

Mrs Cameron – who has three children – also heard from a mother whose three-year-old son was shot by a sniper next to his six siblings as they fled Syria in a car.

“It’s so shocking, it’s difficult to take it in. You just can’t imagine why that would happen,” Mrs Cameron said.

Save the Children chief executive Justin Forsyth, who accompanied her on the visit, said: “Samantha Cameron’s support as a Save the Children ambassador helps draw attention to the plight of children caught up in this terrifying conflict.