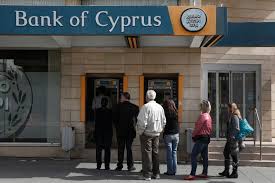 The chairman of Cyprus’s biggest bank, the Bank of Cyprus, resigned abruptly Tuesday following a showdown with the head of the central bank and the Finance Ministry.

Antreas Artemis complained that authorities rode roughshod over him and his board of directors by moving unilaterally to sell off units of the bank in Greece and planning to hit big depositors to pay for losses.

The changes at the Bank of Cyprus are part of the latest bailout deal negotiated between Cypriot officials and the so-called troika of international lenders: the European Commission, the European Central Bank, and the International Monetary Fund.

Mr. Artemis’s resignation, while not wholly unexpected following the controversial decision by international lenders to impose significant losses on the bank’s larger depositors, still caught the market by surprise and was a further reminder of how volatile and uncertain Cyprus’s financial system has become in recent days.

Bankers say that the fact that the board of the country’s largest bank had been left largely in the dark as its future was being discussed in Brussels and that an outside administrator had recently been named to oversee the bank in the coming months were factors likely to have contributed to his decision.

Despite promises since last week that the country’s banks would reopen Tuesday, the government late Monday ordered all of them, including the Bank of Cyprus and Laiki Bank — the nation’s largest financial institutions, with most of the accounts on the island — to stay shut through at least Thursday. The extended bank closing is to reduce the risk of a bank run by nervous depositors. Automated cash withdrawals will be limited to €100 a day.

The island’s faltering banks suffered a new indignity on Tuesday, as Fitch Ratings said it was cutting its credit grades on Cypriot banks because of the losses imposed by the bailout deal on senior creditors.

Fitch said it was cutting its rating on Laiki Bank to “default.” The bank’s official name is Cyprus Popular Bank.

Fitch also cut its rating on Bank of Cyprus to “restricted default,” a grade Fitch said means the bank has experienced a payment default on a bond, loan or other material obligation but has “not entered into liquidation or ceased operating.”

A top European Central Bank official insisted on Tuesday that the case of Cyprus, in which large depositors and senior debtholders were forced to take losses, would not serve as a model for any future bailouts in the euro zone.

The Cyprus bailout “was the solution to a problem that had become desperate,” Benoît Coeuré, a Frenchman and a member of the E.C.B.’s governing council, told Europe 1 radio. “Cyprus was in bankruptcy, that is something that doesn’t exist anywhere else in the euro zone.”

“The situation was so unique that it needed a unique solution,” he added. “But I don’t see any reason to employ the same methods elsewhere.”

In the €10 billion, or $13 billion, bailout agreement announced Monday, only insured accounts up to €100,000 were protected from taxation to help fund the bailout, with estimates that uninsured depositors with larger accounts could face losses of up to 40 percent.

Mr. Coeuré criticized the head of the Eurogroup of euro zone finance chief, Jeroen Dijsselbloem, for suggesting on Monday that the Cyprus model, in which losses were forced on large depositors, might be used as a “template” any for future bailouts.

“He was wrong to say what he did,” Mr. Coeuré said. “The experience of Cyprus is not a model for the rest of the euro zone, because the situation there attained a magnitude that is not comparable to any other country.”

Mr. Dijsselbloem later retracted his words, saying in a statement that Cyprus was “a specific case with exceptional challenges,” and that bailouts were “tailor-made to the situation of the country concerned and no models or templates are used.”

Christophe J. Nijdam, a bank analyst at AlphaValue in Paris, said it was “normal that professional investors take a haircut,” since that was part of the risk-return gamble they make.

But ordinary people “are not equipped to make an informed judgment on the soundness of a particular bank,” he added, and by forcing losses on depositors, “you destroy the little confidence left in the banking system.”