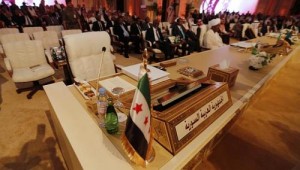 Ahmed Moaz al-Khatib, head of the Syrian National Coalition opposition grouping, also insisted that Syria’s future should not be determined by foreign powers.

“We demand … the seat of Syria at the United Nations and at other international organizations,” Khatib said, addressing Arab leaders at the Doha summit.

Syrian people alone should determine who rules the country, said Khatib, who on Sunday resigned his post although his resignation has yet to be accepted by the Coalition.

“They ask who will rule Syria. The people of Syria will decide, not any other state in this world,” Khatib said, possibly alluding to accusations by Damascus that the rebels are implementing Qatari and Saudi agendas.

Al-Khatib also called on the United States to use Patriot missiles to protect rebel-held areas from President Bashar al-Assad’s airpower.

He said he had asked U.S. Secretary of State John Kerry for U.S. forces to help defend rebel-controlled northern parts of Syria with Patriot surface-to-air missiles.

The opposition forces have few weapons to counter Assad’s helicopter gunships and warplanes.

Al-khatib said the United States should play a bigger role in helping end the two-year-old conflict in Syria, blaming Assad’s government for what he called its refusal to solve the crisis.

“I have asked Mr. Kerry to extend the umbrella of the Patriot missiles to cover the Syrian north and he promised to study the subject,” al-Khatib said, referring to NATO Patriot missile batteries sent to Turkey last year to protect Turkish airspace.

“We are still waiting for a decision from NATO to protect people’s lives, not to fight but to protect lives,” he said.

The Sunni Muslim cleric took over Syria’s vacant chair at the Arab League summit in Doha despite announcing on Sunday that would step down as leader of the Syrian National Coalition.

The emir of Qatar, a strong supporter of the struggle to topple Assad, asked his fellow-Arab leaders to invite the coalition delegation to represent Syria formally at the summit, despite the internal divisions plaguing the opposition.

The Arab League suspended Syria in November 2011 in protest at its use of violence against civilians to quell dissent.

In his opening speech, Qatar’s Sheikh Hamad bin Khalifa al-Thani urged the U.N. Security Council to stop the “oppression and repression of the people” in Syria, halt the bloodshed and “present those responsible for these crimes against their people to international justice.”

The United Nations says about 70,000 people have been killed in a conflict that began with peaceful anti-Assad protests and turned into an increasingly sectarian armed insurrection.

Photo: A pre-Baath Syrian flag, currently used by the Syrian opposition, is seen in front of the seat of the Syrian delegation at the opening the Arab League summit in the Qatari capital Doha on Tuesday, March 26, 2013. Syria’s main opposition group took the country’s seat at the Arab League for the first time on Tuesday as the 22-member bloc opened a summit in the Qatari capital Doha. — PHOTO: AFP