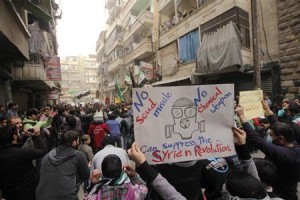 Followers of the religion of Bashar al-Assad who oppose the Syrian president met in Cairo on Saturday to support a democratic alternative to his rule, seeking to untangle his fate from their own.

In the first meeting of its kind by Alawites who support the revolt, delegates aimed to draft a declaration supporting a united Syria and to invite other opposition groups to cooperate on preventing sectarian bloodletting if Assad falls.

“We are inviting all of the opposition to confront the sectarian problem being ignited by the regime. The last card the regime can now play is civil war and the partition of Syria,” said veteran opposition campaigner Bassam al-Youssef, an Alawite who spent more than a decade in jail under the iron rule of Assad’s father, the late President Hafez al-Assad.

As the war takes on an increasingly sectarian bent, distancing the Alawites from Assad could be crucial for the survival of the community, an offshoot of Shi’ite Islam that makes up about 10 percent of Syria’s population.

“But it will help disassociate the sect from Assad. Every effort is needed now to prevent a wide-scale sectarian bloodbath when Assad eventually goes, in which the Alawites would be the main losers.”

At least 70,000 people have been killed since a protest movement led by Syria’s Sunni Muslim majority broke out against four decades of family rule by Assad and his father.

The demonstrations were met by bullets, sparking a Sunni backlash and a mostly Islamist armed insurgency that is leading some Alawites to fear they have no future without Assad.

Assad has said he is fighting a foreign-backed conspiracy to divide Syria and that the rebel forces are Islamist “terrorists.”

A statement by the organizing committee of the Alawite conference said: “The regime, which is becoming more isolated and weak, is working on turning sectarian zealotry into bloodshed. There are anti-regime forces also pushing toward sectarian warfare.”

“Depriving the regime of the sectarian card is crucial for its ouster and for negotiating a Syrian national covenant on the basis of a modern statehood and equal citizenship and justice,” it said.

Alawites were prominent in a leftist Syrian political movement that was crushed by Assad’s father in the 1970s and 1980s, along with Islamist opposition.

Ten Alawite activists from inside Syria who were on their way to join the two-day conference were prevented from travelling, but seven others managed to attend the 100-delegate meeting, Youssef said.

Among prominent Alawites currently in jail is free-speech advocate Mazen Darwish, who worked on documenting the victims of the crackdown against the revolt, and Abdelaziz al-Khayyer, a centrist politician who advocated peaceful transition to democratic rule.

Issam al-Youssef, another activist who is helping organize the conference, said the uprising had given the Alawites a chance to show the sect was not monolithic, and that it aspired like the rest of the population to live under a multi-party democracy, while fearing the rise of Islamist extremism.

Youssef recalled taking part in a pro-democracy demonstration at the beginning of the uprising in the Sunni district of al-Khalidiya in the central city of Homs when the protesters came under attack by a pro-Assad militia.

“A group of us took refuge in a house, and the house owner, who did not know I was Alawite, began cursing Alawites. When my comrades told him I was one, he came to me and gave me the keys to his house.”

“We are in a sectarian crisis and the political forces of the opposition are falling into a serious error by not discussing it,” Youssef said.

He said the document that would emerge from the conference “will affirm Alawite commitment to national unity and inter-communal existence and civic peace,” mirroring a stance the sect’s leaders took during French colonial rule in the 1920s in opposition to proposals for partition of the country.

“There is an Islamist current that is expanding at the expense of the democratic civic current, which needs to unite,” Youssef said. “We as Alawites are Syrians first. We are trying to be part of a real change.”