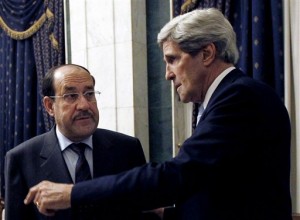 US Secretary of State John Kerry has told Iraq’s PM that allowing Iranian planes to use Iraqi air space to carry weapons to Syria was “problematic”.

Mr Kerry, on an unannounced trip to Iraq, held talks with Prime Minister Nouri Maliki in a bid to boost co-operation over the Syria conflict.

The US has accused Iraq of turning a blind eye to the flights, which Iran claims transport only humanitarian aid.

It is 10 years since the US-led invasion of Iraq that toppled former Iraqi President Saddam Hussein.

The trip is Mr Kerry’s first to Iraq since taking office earlier this year, and the first by an American secretary of state since 2009.

“I made very clear to the prime minister that the overflights from Iran are in fact helping to sustain President Assad and his regime,” Mr Kerry told reporters.

An unnamed US official earlier told the AP news agency that Iranian planes were flying over Iraq into Syria almost every day.

The official said Iraq had promised to inspect the flights, but only two planes had been checked since last year.

He was expected to suggest that Iraq’s government reconsider a recent decision to delay provincial elections in Anbar and Nineveh provinces.

And he was also expected speak by phone to Massoud Barzani, president of the oil-rich autonomous region of Kurdistan, to stress the importance of maintaining Iraq’s unity.