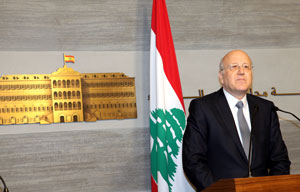 Lebanon’s president accepted the resignation of Prime Minister Najib Mikati on Saturday, Mikati said, calling for a “salvation” caretaker government to take over after a political standoff with the Hezbollah movement.

His departure could plunge Lebanon, already struggling to cope with a spillover of violence and refugees from Syria’s two-year-old civil war, into further turmoil and uncertainty three months before a planned parliamentary election.

The resignation on Friday came after a two-day ministerial meeting remained deadlocked by a dispute with Shi’ite group Hezbollah, a militant and political movement that has dominated Lebanese politics in recent years and helped put Mikati into office after toppling the previous government.

Mikati said he had handed in his resignation to President Michel Suleiman. “Now it is important for dialogue to begin and for a salvation government to be established during this difficult period,” Mikati wrote on his official Twitter page.

“I thank God that I left office the same way I came in, with integrity.”

Hezbollah opposed extending the term of a senior security official, Major General Ashraf Rifi, and the creation of an oversight body for the planned June election, which may now be delayed after the collapse of Mikati’s government.

Rifi, head of Lebanon’s internal security forces, is due to retire early next month. He, like Mikati, is a Sunni Muslim from Tripoli, and is distrusted by Hezbollah.

Putting together a caretaker government could take months. It took Mikati five months to put together his government after he became prime minister in 2011 when Hezbollah and its partners brought down the unity government of Saad al-Hariri.

But tensions over Syria have put him at odds with the group that brought him to power and which strongly backs President Bashar al-Assad in the Syrian civil war.

Under Lebanon’s division of power, the prime minister must be a Sunni Muslim, the president a Maronite Christian and the speaker of parliament a Shi’ite Muslim.

Former Prime Minister Fouad Siniora, a close political ally of Hariri who had frequently called for Mikati to step down, said the resignation “opens the possibility of fresh dialogue” between Lebanon’s political camps.

Mikati had sought to distance his country – which fought its own 15-year civil war – from Syria’s strife. But in the ex-prime minister’s home city of Tripoli, two people died in clashes on Friday between militants supporting opposing sides of the Syria conflict.

The influx of Syrian refugees, as well as Lebanon’s own political turmoil, have caused a sharp slowdown in Lebanon’s economy and a 67 percent surge in its budget deficit last year.