Obama gets diplomatic coup before heading to Jordan 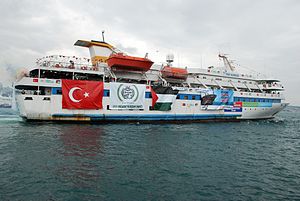 President Barack Obama arrived in refugee-flooded Jordan on Friday after scoring a diplomatic coup just before leaving Israel when Prime Minister Benjamin Netanyahu apologized to Turkey for a 2010 commando raid that killed nine activists on a Turkish vessel in a Gaza-bound flotilla.

It happened in a phone call to Erdogan during a final meeting between Obama and Netanyahu at Ben Gurion International Airport in Tel Aviv minutes before Air Force One departed for Jordan to complete the president’s Middle East swing. It is the first foreign trip of his second term.

A statement from Netanyahu’s office said the apology included an offer of compensation. However, there was confusion later when the Israeli government dropped a reference in its original statement to normalized relations between the countries with a return of ambassadors.

There also was no word on whether the once-close nations would resume the joint military exercises that were suspended after the flotilla raid.

Turkey had been prosecuting four Israeli soldiers in absentia and Israel initially said the two leaders agreed to the cancellation of legal steps against the troops. Later, however, its amended statement omitted that action as well.

Regardless of such confusion, Obama hailed the development as an important step forward for both countries.

“For the last two years, I’ve spoken to both Prime Minister Netanyahu and Prime Minister Erdogan about why this rupture has to be mended,” he told a news conference after talks with Jordan’s King Abdullah II. “During my visit (to Israel), it appeared that the timing was good for that conversation to take place.”

At the airport earlier Friday, Obama said, he and Netanyahu “agreed that the moment was right” to place the call to Erdogan and “they were able to begin the process of rebuilding normal relations between the two countries.”

Obama arrives in Jordan on last leg of trip

The later stop in Jordan focused on the civil war in neighboring Syria, with Abdullah telling reporters that the conflict has caused 460,000 refugees to flood his country and more were on the way.

That equals 10% of Jordan’s population, and the total could double by the end of the year, the king said in asking for more help from the international community as his country also deals with internal reforms in response to economic woes that are raising public dissatisfaction.

Obama said he was working with Congress to provide an additional $200 million to Jordan this year to help deal with the refugee influx, but he remained steadfast in his refusal to pledge U.S. military assistance to the Syrian opposition movement, as called for by critics at home and abroad.

At the same time, Obama repeated past warnings that his stance on military involvement could change if the Syrian government uses chemical weapons.

In Israel, the last-minute diplomacy added a flourish to Obama’s first visit to the Jewish state as president.

While the two nations have a key strategic partnership, with the United States supplying military aid and diplomatic support as Israel’s most vital ally, Obama and Netanyahu had famously frosty relations during the president’s first term.

With both beginning new terms after Obama’s re-election last year and Netanyahu’s recent formation of a new government, the president’s visit was an opportunity to reset the relationship and signal unified positions on major issues such as the Middle East peace process and Iran’s efforts to develop a nuclear weapon.

Before leaving Israel, Obama paid tribute to the father of modern Zionism in a symbolic visit to Theodor Herzl’s grave.

Joined by Peres, Netanyahu and U.S. Secretary of State John Kerry, Obama also visited the grave of former Prime Minister Yitzhak Rabin, who was assassinated in 1995.

Both stops were intended to bolster Obama’s standing with Israelis by demonstrating his understanding of the history of the Jewish state.

Obama placed a stone at each grave from the grounds of the Martin Luther King Jr. memorial in Washington in a gesture to link the African-American struggle for freedom with the struggle by the Israeli people for a homeland.

The president also visited the Holocaust memorial Yad Vashem, where he turned up the “eternal flame” of remembrance of the millions of Jewish victims of Nazi death camps in World War II.

Obama called for the world to follow the example of nations that intervened in Nazi genocide.

“Here, alongside man’s capacity for evil, we are also reminded of man’s capacity for good,” he said. “The rescuers, the righteous among nations, who refused to be bystanders, and in their noble acts of courage, we see how this place, this accounting of horror, is in the end a source of hope.”

In another cultural stop Friday, Obama also visited the Church of the Nativity in Bethlehem, which is on the West Bank, with Palestinian President Mahmoud Abbas.

After putting himself in the middle of the historic tensions between Israelis and Palestinians this week, Obama then headed to Jordan, a military and intelligence partner that has been facing trying times.

Abdullah has a reputation for benevolence, unlike autocratic rulers such as Syria’s Bashar al-Assad or deposed Iraqi dictator Saddam Hussein. One house of the Jordanian parliament is democratically elected.

However, a bad economy and allegations of corruption by public officials have stoked dissatisfaction with Abdullah.

Now, the country wedged between the Palestinian territories, Iraq and Syria faces more pressure from the refugees continuing to cross its borders.

In November, crowds took to the streets calling for Abdullah’s downfall because of rising gasoline prices.

More recently, comments attributed to Abdullah in the The Atlantic caused further anger toward the king, who was quoted as calling the opposition Muslim Brotherhood a “Masonic cult” and referring to tribal elders in his country as “old dinosaurs.”

The royal palace denied that Abdullah made the comments.

In Israel, Obama tried Thursday to invigorate the stalled Middle East peace process, urging young Israelis to pressure their leaders to seek peace with Palestinians while acknowledging the Jewish state’s historical right to exist and defend itself from continuing threats.

In a speech in Jerusalem that Obama had said would lay out his vision for the region, the president urged Israelis to look at the world through the eyes of Palestinians but also said enemies of Israel must change their rhetoric and tactics to reflect modern reality.

“You are not alone,” Obama said in both English and Hebrew, prompting a standing ovation when he declared that “those who adhere to the ideology of rejecting Israel’s right to exist might as well reject the earth beneath them and the sky above, because Israel is not going anywhere.”

When Obama mentioned the name of Abbas in his speech, some boos erupted in the Jerusalem Convention Center among the audience of mostly young Israelis. He also was interrupted at one point by a protester’s shouts, causing the president to joke that the heckling “made me feel at home,” in reference to the caustic political climate in Washington.

He urged Israelis to empathize with the plight of Palestinians, using direct and harsh imagery to make his point, and he drew applause when he criticized the Israeli government’s controversial policy of building new settlements in disputed territories.

Hours before the speech on the second day of his Middle East swing, two rockets fired from Palestinian-controlled Gaza landed in southern Israel.

They caused no injuries or major damage, but served as a symbolic welcome to Obama’s visit to the West Bank later in the day.

In another symbolic moment, Obama received the Presidential Medal of Distinction on Thursday night from Peres at the state dinner that emphasized the close ties between their countries.

In what Netanyahu called a key development of Obama’s visit, the leaders announced new talks on extending U.S. military assistance to Israel for another 10 years past the current agreement, which expires in 2017.

During his earlier visit to Ramallah in the West Bank, Obama stressed the need for direct talks between Israelis and Palestinians for a two-state solution.

“The Palestinian people deserve an end to occupation and the daily indignities that come with it,” he said at a news conference with Abbas, adding that Palestinians deserve “a future of hope” and a “state of their own.”

The core issues right now, Obama said, are achieving sovereignty for Palestinians and security for Israel.

Abbas, however, said the Israeli settlements are “more than a hurdle to peace,” calling them illegal and saying it was Israel’s duty to stop building them.

He envisioned a Palestinian state based on 1967 borders with Jerusalem as capital — a scenario unacceptable to Israel.