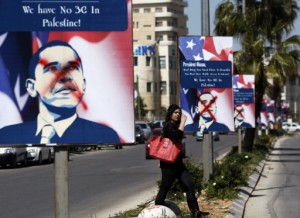 RAMALLAH, West Bank — As Israelis roll out new red carpet and line streets with American flags for President Obama’s visit, the U.S. leader faces a decidedly less enthusiastic reception in the West Bank, where the mood ranges from ho-hum to don’t come.

On Tuesday, dozens of protesters called on Obama to cancel visits to Ramallah and Bethlehem, complaining that the president had failed to do enough to bring them statehood.

Posters of Obama that had been hung along the streets of Ramallah in recent days were defaced Tuesday with spray-painted Xs or, in one case, a swastika. In Bethlehem, a poster was torn down and placed in the road. Some people threw their shoes at the president’s image.

Members of the militant group Hamas warned that if Obama attempted to visit Muslim holy sites such as the Dome of the Rock or Al Aqsa mosque in Jerusalem, which are not on his itinerary, Palestinians would riot.

“We are here to tell Obama that he is not welcome because of his support for Israel,” said Omar Assaf, one of the protest organizers from the group Palestinians for Dignity. “U.S. policy supports Israel, which occupies our land. Our people are going to say no to whoever supports the occupation.”

The anger stems largely from Palestinians’ belief that Obama, despite his promises during a 2009 speech in Cairo, has done little to advance their bid for independence and statehood.

Instead, many here blame Obama for working against them in the United Nations, where the U.S. vetoed a resolution condemning Israeli settlements in the West Bank and blocked a Palestinian Authority bid for U.N. membership. Palestinians ultimately won an upgraded status from the international body last fall, and the U.S. was one of the few countries to side with Israel in voting against the measure.

Palestinian Authority President Mahmoud Abbas “went out of his way to tell Obama and Israel that he wants peace,” said Jamil Shaker, 24, an unemployed accountant in Ramallah. “He got nothing in return except more pressure. Obama fought Abbas in every step he took to gain independence the peaceful way. How can a person like this win our trust?”

The U.S. also withheld nearly $250 million promised to the Palestinian Authority last year, though Obama is expected to announce the release of some of that money during his visit.

Perceptions of a pro-Israel bias, along with the lack of peace talks and worsening financial crisis in the West Bank, are fueling anti-Western sentiments among Palestinians. This month dozens of students attacked a car carrying Britain’s envoy to the Palestinian territories, forcing him to cancel a speech at Birzeit University near Ramallah.

The Obama administration has said the president is not bringing any new peace initiatives with him, leading many Palestinians to complain that the visit is more about improving relations with Israel than reaching out to them.

“Expectations are and should be very, very low,” said Rashid Khalidi, a Columbia Universityprofessor and former Palestinian negotiator.

Abbas and other leaders have been trying to contain public frustration to avoid any embarrassing demonstrations during Obama’s visit. Some low-level government workers in Ramallah have been told to stay home for the rest of the week, and a security cordon is expected to keep a wide distance between the president and any crowds that might gather, Palestinian officials said.

Abbas will meet with the president Thursday. On Friday, Obama will tour the Church of the Nativity in Bethlehem.

Hoping to generate public enthusiasm about the visit, the U.S. Consulate in Jerusalem this week released a video of a 75-second rap song on YouTube, composed and performed by Hebron youths and produced by the consulate. But many of comments on the consulate’s Facebook page were negative and critical of the president’s visit.

“We’ve heard Obama’s promises in the past and saw his actions,” said Omar Shehada, 24, an unemployed Ramallah resident. “Why should we expect that he’s going to change now?”