by Ghassan Karam
911
By: Ghassan Karam, We have often been told that war is hell. The residents of Fallujah, Iraq, are finding out that war for them is the worst kind of hell imaginable.
Share: 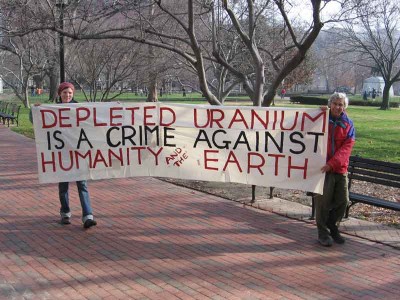 We have often been told that war is hell. The residents of Fallujah, Iraq, are finding out that war for them is the worst kind of hell imaginable. Worse than Dante’s seventh circle if that is possible because the after results of war in Fallujah will be felt for at least a decade or two. One medical doctor We are not talking about physical destruction of homes and factories or the total annihilation of infrastructure such as water utilities, electricity generating plants, sewage plants, bridges and highways. All of these can be rebuilt and life will go on. In this case we are concerned with much more sinister effects of war, effects that linger on and destroy life. What the people of Fallujah, more than any other people in the world, are facing everyday and every second of every day is hell on earth; they have to witness the death of more than a quarter of the new born within a week of their birth and to make the deeply painful decision of what is to be done about the huge proportion of grotesquely deformed babies that are born with two heads, three eyes, no limbs, one eye.

The world owes the people of Fallujah an explanation of what has triggered this avalanche of deformity and horror. The usual celebratory experience of giving birth has been transformed to a time of anxiety and horror. Women dread becoming pregnant and above all carrying the fetus for nine months only to find out that what they are carrying has been condemned to death the moment that life was to begin. Such rapid and unique developments do not occur without a cause. The only logical proximate cause for this human tragedy was the 2003 war and in particular the 2004 assault on Fallujah. It was estimated that during that assault over 10,000 tons of depleted uranium, DU, was used in the bombardment of the city of 300,000 people.

The results of a 2010 study that surveyed over 4000 people in Fallujah concluded that “results seem to qualitatively support the existence of serious mutation-related health effects in Fallujah” and one chemist involved with the study said that he believes that we have evidence of the “highest rate of genetic damage in any population ever studied”.

The above sad and troubling facts are another evidence yet that favours the adoption of the major ecological idea known as “precautionary principle”. It simply states that nothing should be introduced into the ecosystem without being as absolutely certain as possible that it would do no harm. Sadly we keep ignoring this principle and we move from one tragedy to the next: Gulf War Syndrome, Agent Orange and now DU weapons. Will we ever learn.

Both the Pentagon and the British governments insist that the use of DU is not illegal and that the studies that they have undertaken do not reveal DU to be a carcinogen. That might be true but many an international body including the EU and the UN have been trying, unsuccessfully, to prevent the use of DU munitions because there are many physicians, engineers and studies that suspect that the DU produced vapour in battles is capable of contaminating humans, soil and water. It is this radioactive contamination that causes the severe deformities in the newly born “things” since many of them do not look like humans.

A group of doctors at the hospitals of Fallujah have documented the severity of the problems encountered by the newly born and has approached the UN and other world institutions asking for an investigation to determine the root cause of this tragedy. Tragic results from technological developments in war are nothing new. Agent Orange was used extensively to defoliate forests in Vietnam but wound up in causing the death and even childbirth deformities of thousands of people that it was deployed to protect. McNamara, who approved the use of Agent Orange never, forgave himself for all the damage and suffering that his decision has caused to millions of people but especially for loosing his son to an Agent Orange induced illness.

The prospective new parents of Fallujah and the next generation are being asked to bear the unbearable burden of seeing their children die within days of being born or of giving birth to grotesquely deformed beings. This is the result of a war of choice during which one side made the deliberate decision to subdue a city by pulverizing it and by subjecting its innocent civilians to the most incredible of human sufferings. DU is an instrument of death and horror that must be banned from use in war until serious and exhaustive studies can be made to show the opposite. Meanwhile the heart of all decent and honorable citizens in the world goes out to the suffering parents of Fallujah and to the horror that they have been forced to live with. We must make sure that such acts are never repeated again. DU; if found to be the culprit; must be prohibited and declared in violation of the laws of war besides the Declaration of Human rights.