Charbel urges end to ‘Incitement at Places of Worship 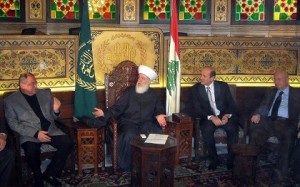 Lebanon Interior Minister Marwan Charbel announced on Monday that ten suspects have been arrested so far over involvement in Sunday’s attacks on Muslim clerics, putting the blame on “the provocative rhetoric at some places of worship.”

“I contacted the leaders of all sects and told them that what happened is unacceptable,” Charbel said after he and Lebanon defense minister met Grand Mufti Sheikh Mohammed Rashid Qabbani at Dar al-Fatwa.

He stressed that “the judiciary is vigilant and it managed to avert strife.”

“We hit the snake on its head, not on its tail,” said Charbel, who said earlier that Hezbollah and Amal are cooperating with the Security force.

The minister stressed that “all clerics know that any security deterioration is not in anyone’s interest.”

Answering a question, Charbel said “the speeches of Sheikh Ahmed al-Asir are not the only provocative speeches, as there are also other figures who are inciting people at places of worship.”

Charbel called on political and religious leaders to “cooperate to prevent the Syrian war from spilling over into Lebanon, because no one will be able to stop it in case it moved to Lebanon.”

He stressed the need to “pacify the situation domestically so that we can see the army on the border.”

Four Sunni Muslim scholars were beaten up in two separate attacks in Beirut on Sunday night, testing a fragile peace between the sects and factions that fought Lebanon’s 15-year civil war.

Mazen Hariri and Ahmed Fekhran, both scholars at Lebanon’s highest Sunni seat of learning, Dar al-Fatwa, were attacked by a group of men in the mainly Shi’ite Khandak al-Ghamik area after they left the Mohammed al-Amin mosque in downtown Beirut, security sources said on Monday.

The two main Shi’ite parties in Lebanon, Hezbollah group and Amal, were quick to condemn the attacks and handed over five suspects to security forces, according to Reuters. They said the five men had been under the influence of drugs.