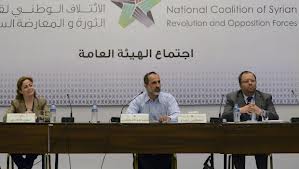 Syria’s rebel chief said in Istanbul , Turkey on Monday that the mainstream rebel Free Syrian Army wants an interim government to administer the whole of Syria and not just the areas freed from regime forces.

The demand came as the main opposition Syrian National Coalition met in Turkey to select an interim prime minister and government for large swathes of territory in the strife-torn country that have slipped out of President Bashar al-Assad’s hands.

“We demand an interim government for all Syrian territory, one that would be the only legitimate government in the country… Any institutions not following this government would be considered to be acting illegitimately and would be prosecuted,” Free Syrian Army chief of staff Selim Idriss told AFP.

“Assad’s government is an occupation government that has lost its legitimacy,” he said.

Asked how an interim government run by opponents would function on the ground, Idriss said: “Institutions in the non-liberated areas would have an opportunity to announce their loyalty to the interim government.”

Should the 70-odd Coalition members succeed in selecting an interim premier, rebels would be tasked with ensuring security for his government, which is set to be based inside Syria.