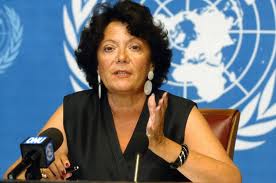 Israel must immediately begin withdrawing its settlers from the Palestinian territories, UN experts told diplomats Monday, even as the new Israeli government appeared set to strengthen the hand of the Jewish settler lobby.

Israel must act to “immediately and without preconditions cease the settlement activity and to initiate a process of withdrawal from the settlements”, Christine Chanet told the UN Human Rights Council in Geneva, lamenting a “rampant annexation” of Palestinian territories.

Chanet, of France, was presenting a report of a fact-finding mission commissioned by the council that deemed that the settlements were leading to Palestinians’ human rights “being violated consistently and on a daily basis”.

The report, published at the end of January, sparked angry reactions from Israel, which at the time slammed it and the Human Rights Council that commissioned it as “one-sided and biased”.

The council’s decision to dispatch the fact-finding mission last March to determine what impact the settlements are having on the rights of Palestinians so enraged the Jewish state that it immediately cut all ties with the body, and on Monday, Israel was not represented at the Geneva forum.

Israel’s new hawk-dominated ruling coalition, being sworn in Monday, is meanwhile expected to strengthen rather than weaken the power of the settlers.

Palestinian representative Ibrahim Khrashi harshly criticised recent comments from Israeli politicians in support of the settlements and condemned the country for not taking part in Monday’s Human Rights Council meeting.

The settlements, he insisted, “kills any possibility to achieve the two-state solution,” decrying Israel’s “flagrant violation of international law” and accusing it of maintaining a system of “apartheid”.

The Palestinians are set to table a resolution Monday calling for the implementation of the fact-finding mission’s recommendations which should be voted on by the end of the council session on Friday.

Almost all country representatives who took the floor on Monday harshly criticised Israel for its settlement policies and its absence from the council. Brazil, also speaking on behalf of India and South Africa, insisted that nothing short of a full withdrawal from all settlements would be acceptable.

US Ambassador Eileen Chamberlain Donahoe however came to Israel’s defence, accusing the UN body of discriminating against the Jewish state.

“The United States remains extremely troubled by the council’s continued bias and disproportionate focus on Israel,” she said.

Israel has come under widespread international criticism for ramping up its construction of settlements in the Palestinian territories, notably in occupied east Jerusalem, which the Palestinians want to establish as the capital of their future state but which Israel considers part of its “indivisible” capital.

All Israeli settlements on Palestinian land beyond the so-called 1949 Green Line are considered illegal under international law.

Chanet, who in January suggested that Israel settling its population into occupied territory might constitute “war crimes,” stressed Monday that International Criminal Court in the Hague should consider prosecuting the violations.

Chanet and her fellow report authors Asma Jahangir of Pakistan and Unity Dow of Botswana, were not permitted to travel to Israel or the Palestinian territories for their mission but instead relied on a wide range of interviews.

She expressed concern “about the situation of thousands of Palestinians detained and imprisoned by Israel” and criticised both sides for rights violations committed during the eight-day conflict in Gaza in November.